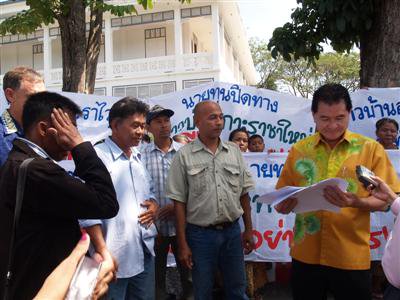 PHUKET CITY: More than 100 villagers from Koh Racha Yai gathered outside Phuket Provincial Hall on Tuesday to protest a new resort development they claim is disrupting their way of life and destroying the environment.

The protesters, led by Chakrit Chandee of the Koh Racha Environmental Conservation and Protection Association, handed a letter to Phuket Governor Wichai Phraisa-ngop outlining their complaints.

The letter made three allegations against the Raya Buri Group, the company constructing the new resort:

That the company had blocked an important thoroughfare on the island, preventing villagers from going about their business;

That two barges carrying building materials for the project damaged a coral reef in Siam Bay, on the island’s northeast coastline;

That the company started construction of the resort without government approval.

The protesters came from villages 3 ,4 and 5 of Koh Racha Yai, which lies about 20 kilometers south of Phuket’s main island.

Mr Sakrit said that Raya Buri Group’s blocking of a 300-400 meter path leading from Siam Bay into the island was causing problems for residents.

“Villagers and business operators on the island are having problems because we are not allowed to walk down an old public way, which is now possessed by an investor named Raya Buri Group,” he said.

Mr Sakrit said the route was closed down ‘temporarily’ four or five months ago, but that Raya Buri had recently erected a ‘no entry’ sign indicating the route was now closed to the public.

“They said the path belonged to them and it was no longer a public way, so no people or vehicles would be allowed to use it,” he said.

“Everybody takes advantage of this route. Villagers transport their produce and carry their longtail boats to the beach down it; and fishermen who anchor their boats in the bay use the path to walk inland,” he explained.

“During the East monsoon season, Siam Bay is the best place to moor a boat,” he added.

Mr Sakrit said damage of a coral reef in the bay was another grievance among island residents.

For our previous report on this incident, click here.

“Despite an agreement between the investors and Phuket Provincial Office that the only beach to be used for offloading construction materials is at Theu Bay, they still use Siam Bay,” he said.

Damage to the reef would damage the local dive industry, Mr Sakrit claimed.

There are four dive shops on Racha Yai. Together with dive shops on Phuket’s main island, Racha Yai attracts more than 200 divers daily during the high season.

Garry Halpin, a representative of the Racha Yai dive operators, said he was concerned because damaged coral takes a long time to grow back.

“We need to meet and find the best way to live peacefully together.”

The construction company did not have permission to build yet still managed to complete 60% of construction, Mr Sakrit claimed.

“I think the main problem is communication,” he said.”We don’t want to be an enemy of the Raya Buri Group, we just want to have a discussion and agree on how we can live together in peace,” he said.

After receiving the letter from the protesters, Gov Wichai promised to visit the island with officials from Bangkok and senior Phuket police officers to survey the scene.

Alcohol act to be strictly enforced in Phuket