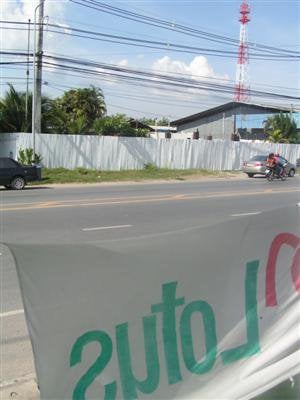 WICHIT: Some 50 protesters gathered at Phuket Provincial Office on December 26 to protest the construction of a new Tesco-Lotus branch on Chao Fa East Rd, which if completed would become the retail juggernaut’s third branch on the island.

The protesters, some of whom are vendors at the Moom Muang market near the proposed project site, converged at Provincial Hall about 2 pm.

In the absence of Phuket Governor Niran Kalayanamit or any of his deputies, the complaint was accepted by Governor’s Office chief Rapeeput Na Nakhon.

Wisate Sabaijit, acting Chief Administrative Officer (Palad) of Wichit Municipality, told the Gazette that on September 5 Tesco-Lotus was granted permission to build the new retail center, which will be located on a long, narrow plot along the inbound land of Chao Fa East Rd in Wichit, several hundred meters south of the PTT service station.

The project will cover a total land area of 1,729 square meters, he said.

All the required procedures had been adhered to and a building permit was issued by his office on that day. As such, there is now no legal basis under which construction can now be stopped, he said.

However, local residents say they will continue to protest the project. Retired local resident Sunanta Iam-anancharoen said the project would have a negative impact on the livelihoods of vendors at Moom Muang market and other small businesspeople in the area.

K. Sunantha told the Gazette that the recent opening of the controversial Laguna Tesco-Lotus Market Cherng Talay, in Thalang, against strong local opposition was a bad sign.

Although a complaint had since been filed with the Administrative Court over its legality, the Cherng Talay Tesco opened just in time to take advantage of brisk holiday season sales.

The first Tesco-Lotus branch in Phuket opened with great success at Samkong Intersection on the bypass road in October 1999. Numerous other large retailers have opened on the island since then, especially along the bypass road, with little or no public opposition.

A source at the Tesco-Lotus Corporate Affairs Department declined to comment on the new store at that time, but said the retailer would issue a statement soon.

Construction on the project is now in the land-clearing phase.

Nationally, Tesco-Lotus and rival retailer Big C have both refused to comply with the Commerce Ministry’s proposal to regulate modern retail expansion in the absence of the country’s first retail and wholesale business law.

The Commerce Ministry on December 26 called for a meeting with retailers and suppliers to seek agreement on temporary regulations to end the conflicts between big and small players.

While other retail giants agreed with the proposal, Tesco-Lotus and Big C were the only two to find fault with some of the regulations. They said the rules must be changed, as some details were too restrictive for chains wanting to expand.

The MoU aims to create a fair framework for big and small retailers as well as suppliers after the retail business bill failed to be passed into law by the NLA during its term.

The ministry asked all firms to decide again whether they would consent to the agreement, for which a signing ceremony is scheduled for the middle of next month.

Yangyong Phuangrach, director-general of the ministry’s Internal Trade Department, said all retailers should respond positively to the regulations since that would lead to better understanding between small and large operators.

“Only Tesco and Big C seemed to oppose the regulations,” he said.

“If large retailers comply with the regulations, small retailers must halt their protests against large enterprises,” he said, adding that suppliers should also treat both retail giants and small operators with fair practices.