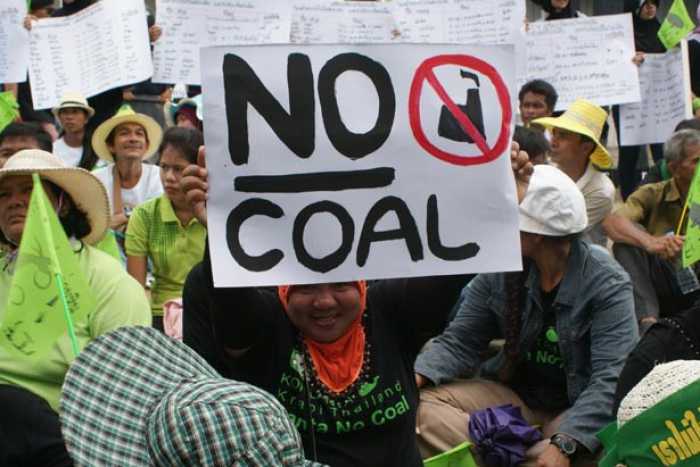 PHUKET: Hundreds of residents stood together against Krabi’s coal-fired power plant at public hearing for the project yesterday. The protestors claimed that the meetings were setups and locals were not being heard.

The hearing, led by the Electricity Generating Authority of Thailand (EGAT) and guarded by a brigade of armed soliders and police officers, was held at Nua Khlong Community Hall.

Not long after the meeting started, about 500 protesters showed up with green flags displaying a picture of a dugong and posters calling for “No coal”.

“This is yet another public hearing being held with hundreds of armed officers standing outside. Why would the EGAT ask for armed personnel, if they are being honest and have nothing to hide?” said Somsak Nobnob, one of the protesters.

“We will do everything it takes, within our rights, to stop the project. I want EGAT to know that they can’t force this on us.

“They have been dishonest and are not following the law.”

Many protesters outside the hearing told the Phuket Gazette that they were worried about the environmental effects the project will have on the province.

“If the plant is established, it will affect the province and the world, as Krabi would no longer be a part of the world’s wetlands,” he said.

“EGAT must listen to us, to the locals, when we say no.”

Another protester told the Gazette that Krabi is slated to become a green province and that a coal plant would go directly against the initiative.

“The US and many countries in Europe are eliminating coal plants. Krabi is meant to be a green place. It doesn’t make sense to allow one here,” he said.

Krabi residents have long protested the 870-megawatt coal-fired power plant to be built in the Nua Khlong district and a coal seaport to be established at Ban Klong Ruo.

The last public hearing was held at at Ban Klong Ruo late last month, during which the Koh Lanta Tourism Association claimed that EGAT had been dishonest with locals (story here).

In February last year, protesters in green t-shirts gathered at Krabi Provincial Hall and carried placards saying “Coal is killing us” and “Our ancestors built up this land, but coal is ruining it” (story here).

Then in March of this year, locals protested again, claiming that the planned project would cause pollution and damage eco-tourism industries, which generate billions of baht each year for local people (story here).