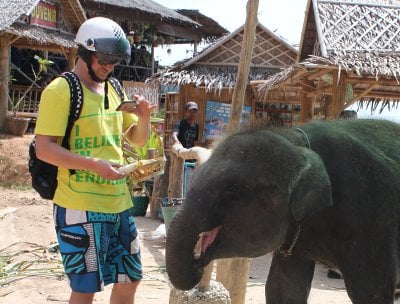 PHUKET: Officers who led the raids on three elephant camps in Phuket late last month are back on the island to continue their investigation into whether all the elephants at all three camps were legally obtained.

The investigation focuses on three camps: the ATV @ Hill Adventure Tour camp on the road to the Big Buddha image in Chalong; the Elephant Camp at the Laguna complex in Cherng Talay; and the PhuThai Souvenir Market in Chalong.

“I have visited the three elephant camps again to follow up on our investigation,” Col Watcharin Phusit, the superintendent of the regional Natural Resources and Environment Crime Suppression Division, told the Phuket Gazette today.

“We are now waiting for the results of DNA tests, which were actually supposed to be available about the end of February,” he said.

The DNA tests are expected to prove conclusively whether or not the baby elephants are the offspring of a female elephant seized at the Pang Chang Sai Yok Elephant Park in Kanchanaburi province in January.

That adult female was discovered to have been illegally obtained and has since been seized by National Parks, Wildlife and Plant Conservation (DNP) officers and transferred to the Thai Elephant Conservation Center (TECC), a state-run enterprise in Lampang, Col Watcharin explained.

“The baby elephants seized have been sent to the Thai Elephant Conservation Center in Lampang. Their mother was seized because the identification document for her that the camp owner of the Sai Yok Elephant Park presented to us didn’t match,” Col Watcharin said.

“Now we are waiting for the DNA test results. After we have those results we will then be able to follow the legal process,” he added.

Col Watcharin previously told the Gazette, “Anyone found guilty in the case will get up to four years in jail, a 40,000 baht fine, or both in accordance with Wildlife Preservation and Protection Act.”

Since the raids on February 27, Laguna Tours & Quest has publicly denied any wrongdoing in their operations.