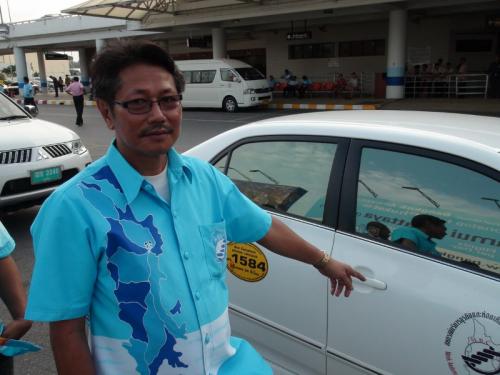 PHUKET: After days of protests by taxi drivers operating under the Mook Andaman Cooperative, officials at Phuket International Airport will allow 25 of the drivers to serve passengers at the airport without further delay.

Airport management, a division of the state enterprise Airports of Thailand (AOT), capitulated yesterday by allowing 25 of the drivers to operate under one of the two taxi companies that have been granted a government concession to serve the airport.

Phuket Land Transport Office Chief Terayout Prasertphol explained, “Mook Andaman will have 25 cars join Phuket Mai Khao Company on the condition that each driver pays a monthly fee of 2,600 baht plus 25 per cent of income earned from fares, and drives either a Toyota Altis or Camry with an engine capacity over 1,600cc.

“If Mook Andaman does not have enough cars that satisfy the legal requirements, we will be flexible and have them present a list of drivers and their vehicles so we can pass that on to Phuket Mai Khao Company for consideration,” he added.

The move to have Mook Andaman’s former “black plate” taxi drivers continue to serve the airport was made in November last year when the AOT allowed 50 drivers to operate under the two legitimate concession holders as a temporary measure until Mook Andaman was granted its own concession (story here).

However, Mook Andaman representatives accused concessionaire Phuket Mai Khao Company of not allowing their drivers to serve the airport as agreed.

The point of contention reportedly was that the vehicles used by Mook Andaman drivers did not satisfy the requirements laid down by law for taxi drivers serving the airport.

Mook Andaman Secretary Ittipol Mektanee told reporters that his drivers had been waiting since last August for AOT to respond to their request to serve passengers at the airport.

“We have been denied the right to work by the AOT staff and by the companies who have gotten concessions at the airport. We want the AOT to clarify what our working rights are,” he said.

Phuket Airport Director Prathuang Sornkham explained on Tuesday that the AOT had decided to delay granting Mook Andaman a concession until the contracts for the two existing concession holders expire in June.

Director Prathuang told the drivers that the AOT review would “be finished as soon as possible.”

Adding fuel to the driver’s ire, however, was silence from the AOT on whether or not the co-op could set up a service counter within the airport terminal.

Tempers also flared on Tuesday after two Mook Andaman drivers were stopped and stripped of their driver’s licenses by airport staff when the drivers were found not to have the required passenger pick-up voucher.

The move only prompted Mook Andaman representatives to ramp up their protests.

The voucher is a standard feature at major airports in Thailand, introduced so taxi counter staff have a record of which taxi drivers serve which passengers at what time, and at which destination the passengers are to be dropped off.

Patcharapol Yimyam, one of the drivers who was stopped, said, “While I was taking a passenger out of the airport, airport staff used a car to block me and asked for my passenger pick-up voucher.

“I didn’t have that voucher, so the staff stopped me and seized my driver’s license. I want to know why they stopped me. I want to see fair treatment of our group,” Mr Patcharapol said.

Now with a stop-gap deal brokered, Mr Terayout said he expected Mook Andaman to have drivers ferrying tourists from the facility by this weekend.

“If Mook Andaman has their list of drivers and vehicles prepared in time, they should be able to have 25 drivers serving the airport again by tomorrow,” he said.

However, the deal may be only a temporary reprieve from further protests.

The 25 names to be provided must already be on the list of 50 drivers who were approved to work at an airport-taxi meeting last November.

Mook Andaman President Songtham Mekmanee explained that only 25 of the drivers named on the list were from his co-operative.

“The others are not our members,” he said.

“I will file a complaint about this problem to the AOT to reconsider the names on the list,” Mr Songtham added.

The Mook Andaman drivers, who illegally served the airport for years, have maintained constant pressure on the airport authorities this week by staging a battery of protests.

The protests came while the heads of major airports throughout the region were in Phuket for the ‘Airports Council International Asia-Pacific regional assembly’, held Monday through yesterday.