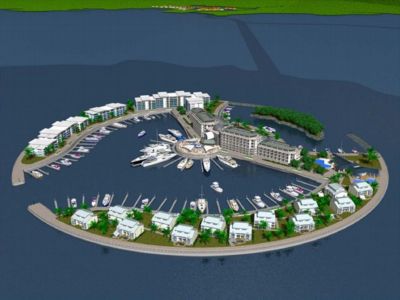 PHUKET: Following reports that a man-made island was ready to be built off the east coast of Phuket to accommodate a marina for mega-yachts, the marketing manager at Royal Phuket Marina [RPM] clarified that the project is still in the early planning stages and faces many obstacles before it can become a reality.

RPM Marketing Director Wilaiporn Titimanaaree told the Gazette that developer Gulu Lalvani will hold a press conference at RPM on May 25 to announce his plan, which envisions a 6.6-billion-baht marina, luxury hotel and villa complex on reclaimed land about three kilometers off Phuket’s east coast.

K. Wilaiporn told the Gazette that a recent report by news agency Reuters had misquoted Mr Lalvani as saying that the project already had the approval of the Phuket Governor.

As a result, Gov Niran Kalayanamit has been besieged with requests to verify the story since it was released, she said.

Mr Lalvani wished to clarify the matter by saying that he had discussed the idea with former governor Udomsak Uswarangkura, who had only agreed in principal with the plan to build a man-made island off the coast near RPM.

It has not clear whether the island, if built, would fall under the jurisdiction of Phuket or Phang Nga province.

Mr Lalvani said he is aware of the obstacles that will need to be overcome, including the need to get public approval for the massive project in an area not far from where environmental activists have been protesting actively against the construction of a simple pier, she said.

The idea for a man-made island capable of berthing mega-yachts was inspired by a visit to Phang Nga Bay in April by Bill Gates and his wife Melinda aboard his yacht, Reuters reported.

Mr Gates was quoted as telling Mr Lalvani that he loved the area so much that he would like to visit every year, if only he could find a marina capable of berthing the 54-meter vessel.

To accommodate the needs of Mr Gates and the world’s other super-rich, Mr Lalvani proposes to build “Zoran Island”, named after his third son. The project would be reminiscent of “The Palm” and “The World” projects off the coast of Dubai, Reuters quoted him as saying.

Many more details about the project concept will be unveiled at the upcoming press conference, at 5 pm at RPM. The event will also be used to officially announce RPM’s hosting of the PIMEX boat show in early November and to outline the significance of Phuket being named “Asia’s Maritime Capital” at the prestigious Christofle Asia Boating Awards held in Bangkok last month.

Despite some confusion, reaction to the plan has been mostly positive.

Gov Niran told reporters that no one had contacted him about the project. “I just learned about it from the media,” he said.

However, he added that it would be good for Phuket to have more ports for yachts, and the idea is in line with a provincial plan to turn the island into the new “Marina Hub of Asia”.

“Currently, there are not enough marinas,” he said.

The project would first have to be carefully studied and its potential impact on the environment and the local communities assessed, he said.

Investors from many countries, including Saudi Arabia, Russia and India, were interested in investing in hotels and marinas in Phuket, he added.

Tourism and Sports Minister Suvit Yodmani welcomed the idea, saying that it could promote a good image for Thailand’s tourism.

However, he also said more details of the project were needed and it must be studied further.

Phuket Tourism Association Chairman Maitree Narukhatpichai said he would not object to the project as long as it did not harm the environment and local ways of life.

“But if he’s interested in developing such a project, it’s in line with our provincial strategy to promote marine tourism,” Gov Winai said.

However, Wildlife Fund Thailand Coordinator Thanu Nabnien expressed concern that a man-made island could harm the ecology of Phang Nga Bay, which he described as an important part of Asia’s natural heritage.