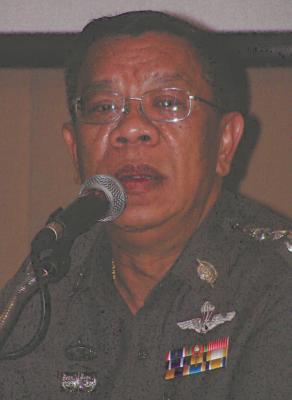 PHUKET CITY: Police in Phuket were told yesterday that they must make big changes to the way they work and the way they are perceived by the public, or face having massive and humiliating change imposed on them. Speaking to a meeting of officers at the Royal Phuket City Hotel, Pol Lt Gen Somsak Buppasuwan, commander of Police Region 8 in Surat Thani, said, “It’s time to re-engineer the entire Royal Thai Police system. We have to change. According to opinion polls, the Royal Thai Police are perceived as the worst organization in Thailand, and people hate us.” The meeting followed a deadline issued recently by Prime Minister Thaksin Shinawatra, in which, Gen Somsak said, the PM gave police a year in which to “improve and behave themselves”. He said the PM had warned that if significant changes were not seen by the end of that time, he would take over all police operations himself and shut down the force. “We have to identify the problems that have contributed to these findings in the polls,” Gen Somsak said. “PM Thaksin has ordered [senior officers] to help to change the behavior [of police] and people’s perceptions of us. “He said that if nothing changed, then the only thing he could do would be to disband the Royal Thai Police and post officers to provincial offices or to work as community police,” Gen Somsak explained.