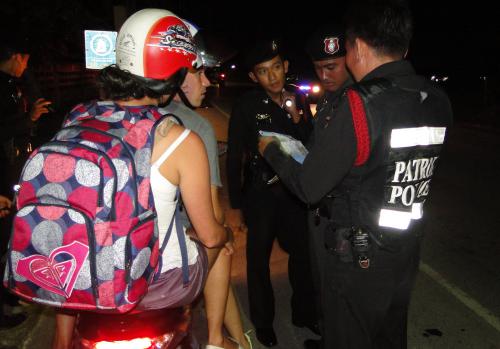 PHUKET: Police trainees from Surat Thani saw some frontline action in Phuket this week when they received on-the-job training at a checkpoint in Baan Bang Jo, in Srisoonthorn.

Thalang Police Deputy Superintendent Amnuay Kraiwootthinan and a team of officers supervised the 14 trainees assigned to the Thalang precinct, while another 43 trainees from Surat Thani were dispatched to assist in Phuket City, Chalong and Patong.

The 57 police trainees, not formally called “cadets” as they will not graduate as commissioned officers at the Police Academy in Bangkok, have been assigned to assist Phuket Police perform their duties as part of their training at the Provincial Police Region 8 Training Center (see here).

In Thalang this week, the trainees conducted routine stops and checks of vehicles and their drivers, including body searches.

“The checkpoint’s purpose was to thwart crime, in particular drugs and possession of dangerous weapons, and to enable the trainees to operate in ‘real situations’,” Lt Col Amnuay said.

“We will enable them to learn from real experiences during their time here,” he added.

The 57 trainees will depart Phuket on October 25 in order to prepare for their graduation ceremony at Provincial Police Region 8 headquarters in Surat Thani.

However, they will return to Phuket as police officers in November, accompanied by a further 40 officers, bringing the total number of new officers on the island to 97.

Having new recruits assigned to Phuket is part of the Royal Thai Police’s current push to increase the number of officers on the island in order to boost public safety (story here).

On roadside north of Phuket, stomachache turns into baby boy