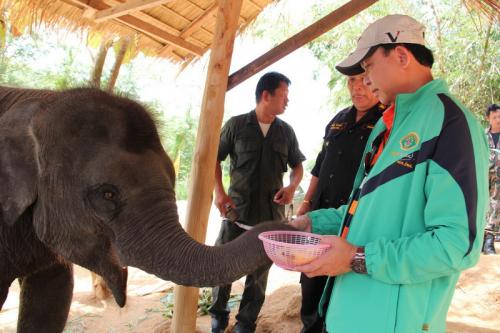 PHUKET: Police have identified a prime suspect in an illegal elephant smuggling ring that led to the recent DNA testing of two baby elephants in Phuket (story here).

A Kamnan in Chaiyaphum province who police have yet to name will be charged with making and using fraudulent elephant certification documents, Col Watcharin Phusit, Superintendent of the Regional Natural Resources and Environment Crime Suppression Division, explained to the Phuket Gazette.

“We believe that the man contacted an officer in the Muang Chaiyaphum District Office to issue illegal elephant certificates,” he said.

“All involved will be charged with making and using fraudulent documents, and face fines of up to 40,000 baht, imprisonment up to 4 years, or both,” Col Watcharin said.

“The two baby elephants found in Phuket are likely to have fraudulent papers,” he explained. “Both of the elephant owners said that their registration documents were issued by the Muang Chaiyaphum District Office.”

Col Watcharin said that the first step would be to prosecute the Kamnan and some other officials in Chaiyaphum. Then charges of illegally possessing a wild animal will be levied against the elephant owners in Phuket, who would face the same penalties.

Blood samples have already been taken from the baby elephants in Phuket and sent to the Department of National parks, Wildlife and Plant Conservation (DNP) but have not yet been examined, he said.