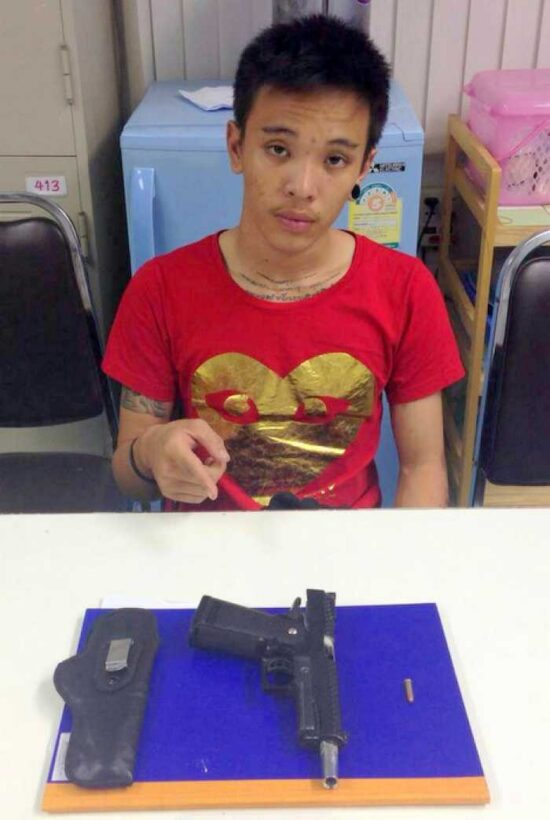 PHUKET: Police have arrested two teenagers, and expect to soon take into custody a third suspect, for shooting into a shop and then a family home in Phuket Town late Tuesday night.

Butrprom Choopeng, 18, was arrested yesterday at a house in Bangthong village in Kathu. He was found in possession of a homemade .22-caliber handgun with one round of ammunition.

The second suspect arrested, a 17-year-old, was taken into custody at a house in Phuket Villa 3 in Wichit. The teen was found in possession of a homemade .38-caliber handgun with five bullets.

“This is a very serious case; these teens are fearless of the law. We realized that we needed to arrest them as quickly as possible,” said case investigator Lt Col Somsak Thongkliang of the Phuket City Police.

Col Somsak explained that the teenagers were identified through CCTV footage after a gang of about 20 teenagers on motorbikes were seen pulling up in front of the BR car rental agency on Phang Nga Road in Phuket Town at about 11pm on Tuesday.

“Three of the teens opened fire into the shop several times before speeding off on their motorbikes,” he said.

Later that same night, the same gang of teenagers opened fire on the home of Tawatchai Boonrit, who owns BR car rentals.

“They pulled up in front of the home, in Soi Surin 2, and fired several shots into the house before speeding off,” Col Somsak explained.

No people were injured in either attack.

“They call themselves the Wan-Wai Gang,” said Sirote Boonrit, the elder son of Mr Tawatchai. “Most of them are teens from Patong and Thung Thong in Kathu.

“They might be the same gang that my younger brother Bank has had trouble with.”

Mr Butrprom and the 17-year-old both told police that they took exception to Bank recently becoming involved with the girlfriend of one of the gang members.

Phuket City Police Superintendent Sermphan Sirikong confirmed that both teens arrested were charged with possession of illegal firearms, unlicensed possession of ammunition and carrying firearms in public with a permit.

Police have since confirmed that Mr Butrprom was also wanted on an arrest warrant for causing physical injury to a person in an incident last year.

“Mr Butrprom and the 17-year-old will remain in custody at Phuket City Police Station while officers continue their investigation,” Col Sermphan said.

“The third suspect has already contacted the police and said he would like to surrender.”