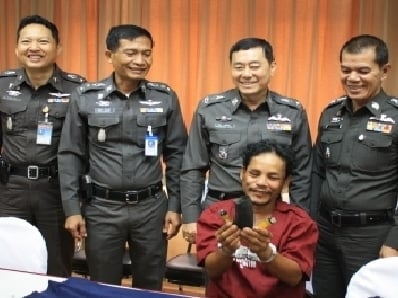 Presented to the press this morning was Sangworn Toe-udtha, 37, from Phang Nga, who is now facing charges of five counts of arson.

Officers on patrol yesterday afternoon recognized Mr Sangworn, who was standing by the side of Yaowarat Road near Tesco-Lotus.

His face closely resembled that of the man captured on CCTV footage setting a car alight last month, police said.

The officers inspected his bag and found three lighters, a pair scissors and a screwdriver.

This inspired the officers to search where Sangworn lives – under the DTAC telephone exchange container near Darasamut Junction, just down the road.

Among his belongings, the officers found blue pants matching those worn by the arsonist caught on CCTV.

The officers brought Mr Sangworn to Phuket Town Police Station for further questioning, during which he confessed to setting five cars on fire in early November, police said.

He set pieces of rubber tires alight and placed them on the front wheel on the victims’ cars, which matched a consistent factor in five car arson attacks in Phuket Town last month, police said.

Mr Sangworn apparently confessed that he was drunk when he set each of the cars alight.

The first of the five car fires was on November 2, when Suthida Srisamutr, 57, found her car ablaze in front of her house on Satun Road at about 11:30pm.

The midnight arson attacks abated until November 10, when Patcharin Kongpetr, 31, from Songkhla, found her car on fire on Phang Nga Road around 1am.