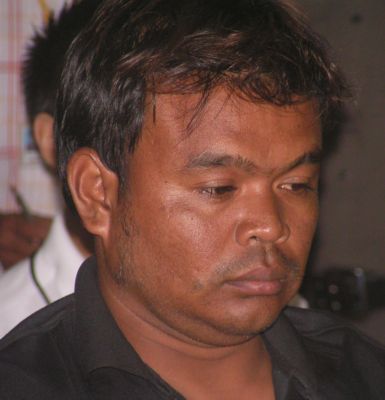 PHUKET CITY: After a regional manhunt for the killer of Swedish tourist Hanna Charlotta Backlund, 26, whose body was found at Mai Khao Beach on Saturday, police have arrested and charged with murder their prime suspect after he gave himself up in Ranong province early this morning.

Region 8 Police Deputy Commander Maj Gen Tavat Boonfueng led a team to Ranong to bring Akkaradej Tunkae, 31, back to Phuket, arriving at Tah Chat Chai Police Station in a police van at 5:30 am, it was announced at a press conference this morning.

Akkaradej allegedly told police that he had watched Miss Backlund and her friend Emma Stenman at Mai Khao Beach for three days until on Saturday he spotted Miss Backlund sunbathing alone.

He approached Miss Backlund from behind, with a kitchen knife in his right hand taken from his home in Thalang, police said.

He grabbed Miss Backlund by her throat with his left hand and, when she attempted to break free, stabbed her in the neck, stomach and side of her body, police added.

After rushing to his home on his motorcycle, he cleaned the knife and hid it in a closet before he changed his clothes, said police.

On Sunday morning, Akkaradej and his daughter traveled by bus to a relative’s home in Chumphon province, police told reporters.

After hearing media reports that police had spoken to locals and were moving in on a prime suspect in the murder, Akkaradej left his daughter in the care of his relative and traveled to a friend’s home in Ranong, the police said.

Akkaradej called his wife and father and told them where he was, which the pair then reported to police. Last night at Tah Chat Chai Police Station, Akkaradej’s father persuaded him by phone to give himself up, the police said.

With Akkaradej’s wife and father present, police took Akkaradej into custody in Baan Tublee, Ranong province, at 1:35 am.

Lt Gen Thanee Thawisri, commander of Royal Thai Police Region 8, said, “The knife has been found and will be sent to Surat Thani for testing. We will have the results of DNA tests soon and will take samples from the suspect’s clothes, finger nails and tissue.”

Akkaradej said, “I feel bad about everything that has happened. The night after I did it I went back to my home and cried. I feel hurt and sad for [Miss Backlund’s] family and also for my family. I accept everything that I did because I feel pity for my own daughter.”

The case will be sent to court within one month, said police.

The 100,000-baht reward offered by local businesses for information leading to the arrest will be given to Akkaradej’s wife and father, police added.

Christina Palm, acting Swedish consul, told reporters, “I am very happy that the police arrested the suspect so quickly. I would like to thank all the officers involved in this case.”