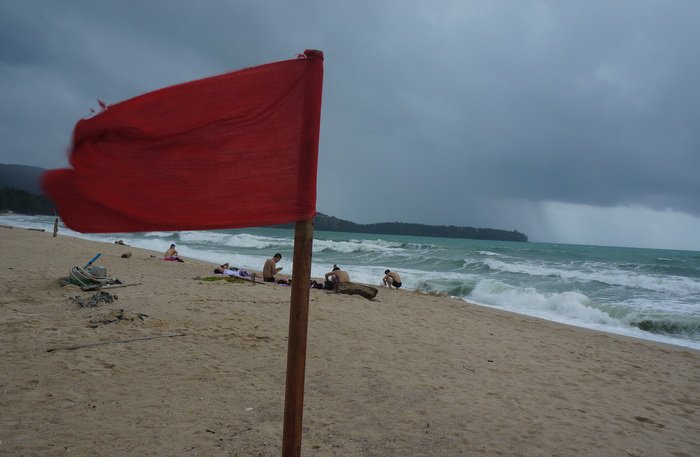 PHUKET: The warning issued by the Phuket Marine Office for all boats less than 10-meters long to stay ashore remains in effect today.

“However, it is fine for smaller boats to access nearby islands, such as Coral Island, Koh Lon or islands in Phang Nga Bay,” said Natchapong Pradit of the Phuket Marine Office.

The letter issued by the Department of Disaster Prevention and Mitigation (DDPM) cites the Thai Meteorological Department (TMD) warning of heavy rain, strong winds and large waves reaching up to four meters in the Andaman Sea.

“All ships should proceed with caution, as well as stay tuned to the weather forecast and official orders until further notice,” said Santhawat Riwleung, chief of the DDPM Phuket office.

Due to the serious weather, lifeguards have also opted to close several beaches on Phuket.

“We made the call based on the necessity of keeping everyone safe,” President of Phuket Lifeguard Club Prathaiyut Chuayuan told the Phuket Gazette. “I would like all tourists to pay attention to what flags have been put out on the beach they are visiting and to respect lifeguards’ instructions.”