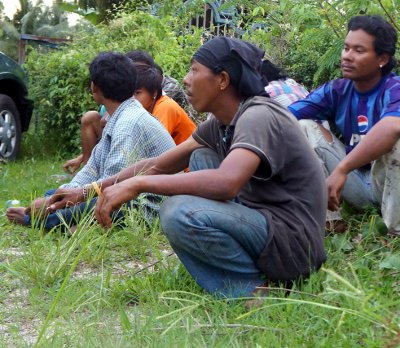 PHUKET: Following the successful drug rehabilitation camp in Koh Kaew at the beginning of this month, organizers are now planning a second one in Wichit for June.

“The Koh Kaew drug rehabilitation camp was a success with 67 of a total of 80 subjects participating,” Phuket’s Muang District Chief, Supachai Pochanukul, told the Phuket Gazette on Friday.

“The 13 who missed the camp will receive warning letters telling them to join the next camp or face disciplinary action,” said Chief Supachai.

The program aims to turn drug users lives around and is part of the “One OrBorTor, One Drug Rehabilitation Camp”.

Wichit Sub-district Administration Organization (OrBorTor) is the next OrBorTor to host the camp, because they have the funds to support it, Chief Supachai explained.

“The camp costs about 3,500 baht per participant,” he added.

Although the Koh Kaew camp has finished, a close eye will be kept on its participants. From June onwards, they will have to report monthly to Koh Kaew Hospital for an entire year, said Chief Supachai.

Koh Kaew OrBorTor has the budget to support their participants, should the participants want to setup a group activity to help the community, such as arranging sports clubs or cleaning up the parks in Koh Kaew, he added.

“If any of them fail a drug test again they might have to rejoin the drug rehabilitation camp or we might decide to take legal action,” he said.

Chief Supachai told the Gazette that every district office in Phuket offers drug testing and seminars for hotels and schools to educate staff and students about the disadvantage of drug use and how to take preventive measures.