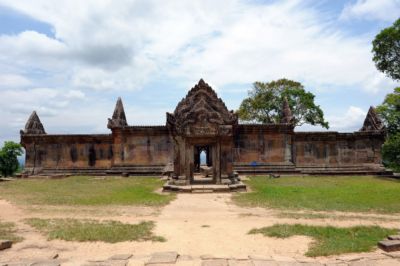 PHUKET: More than 100 of Phuket’s red-shirt United Front for Democracy against Dictatorship (UDD) activists have taken buses to Bangkok to join today’s pro-Thaksin Shinawatra rally in front of Government House.

Meanwhile, the island’s yellow-shirt People’s Alliance for Democracy (PAD) members have headed to Sisaket province to a protest at the Cambodian border, close to the disputed Preah Viharn temple.

Around 30,000 UDD supporters are expected to join the Bangkok rally, which is being held on the anniversary of the coup that ousted former prime minister Thaksin three years ago.

Sunthorn Toemarn, one of Phuket’s red shirt leaders said, “We won’t return to Phuket until the protest finishes, even if it ends up being prolonged.”

In Sisaket, around 1,000 PAD protesters are expected to rally near Preah Viharn to demand Cambodian civilians and soldiers move out of the 4.6-square-kilometer disputed area, claimed by both Thailand and Cambodia.

“We prefer stronger people to go to this protest because there are risks involved. There may be people there who want to harm us,” Ms Aparat explained.

“We don’t know when this protest will finish because it will go on until the Thai government does something to protect the country,” she said.

Ms Aparat said the PAD was campaigning in Phuket to raise awareness of the Preah Viharn dispute.

“We’ve been distributing leaflets and making public speeches at the weekend market and in the villages,” she said.

“We’re getting a good response,” she added.