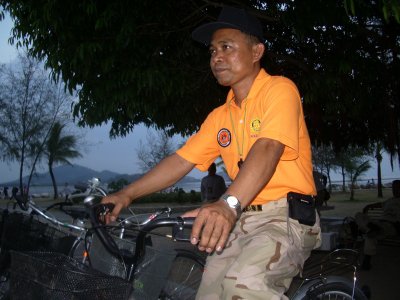 New chief of Muang District, Supachai Pochanukul, wants to end the violent crime that has made the park a ‘no go’ area for some after dark.

“Saphan Hin park is a location that tourists and locals alike enjoy visiting,” he said. People come to the park for various reasons, whether playing sports or just to relax. Sometimes they remain in the park until late at night and we hope that the volunteers can help them feel safe to do so.”

An opening ceremony took place at Saphan Hin on March 6 to launch the initiative, which will see around 20 Phuket Volunteer Security Force members patrolling the park from 6:30pm to 11:30pm every night.

Chief Supachai said the “bicycle guard” project is a collaboration between Phuket City Hall and the Rotary Club of Phuket with a total of 80 volunteers taking part.

“Feedback has been very good since the start of this project. People are friendly to us and some have said they would like us to stay further into the night,” said a volunteer organizer who wished to remain anonymous.

“We often encounter teenagers taking drugs, but they quickly run away. As we are only on bicycles, we cannot chase after them. Actually, it is not our duty to pursue and arrest,” he said.

Another volunteer added, “If we encounter serious problems like accidents, each of us has a radio with which we can immediately contact the police.”

Chief Supachai would like to see the project extended to other areas such as King Rama IX Park, Rang Hill, and even the beaches.

“However, one thing I am concerned about is maintaining support for the project,” he said. “The volunteers are not getting paid. They are sacrificing their time out of the kindness of their hearts.”

Private jets to rise in Phuket