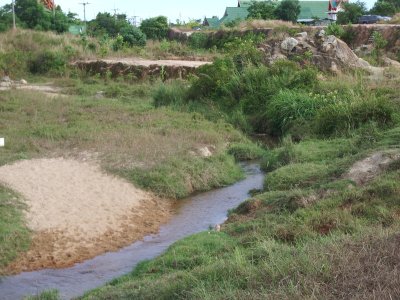 CHALONG, PHUKET: The Klong Krata Reservoir project has been delayed by several months while the agency responsible awaits approval to use Forest Department land needed for construction.

The 600-million-baht project will see the construction of a 25-meter-high dam spanning 730 meters across the existing Klong Krata stream, creating a 430-rai reservoir and recreational area.

The Klong Krata catchment area comprises a hilly area on the Chalong side of the Nakkerd Hills, the same area where a planned road connecting Chalong and Nanai Road in Patong is on indefinite hold pending revision of its Environmental Impact Assessment.

The 6.2-million-cubic-meter reservoir would cover much of the area between the Nakkerd foothills and Wat Luang Pu Supha.

Phuket Provincial Irrigation Office (PPIO) director Weerawat Aungsupanith told the Gazette the water will be used to augment domestic supplies in the area as well as to irrigate 200 rai of nearby farmland. The reservoir office will be located nearby at Ban Nakok.

The project will be funded under the central government’s 100-billion-baht Thai Khem Kheng (Strong Thailand) stimulus package for 2012.

The only thing holding up the project now is gaining the right to use Forest Department land.

“Now we are just waiting for the Ministry of Natural Resources and Environment to approve the request. I think it will take about one or two months. After that we can sign a contract with the project contractor,” Mr Weerawat said.

To further increase supplies, work is also underway on a 41-million-baht contract to expand the storage capacity of two tin mine ponds located behind Phuket Rajabhat University.

The two mines are separated by the back access road to the university.

The smaller of the two will be expanded to 15 rai and its storage capacity increased to 50,000 cubic meters under a 14-million-baht budget.

The other pond, closer to the Butterfly Farm, will contain 500,000 cubic meters of water and cover 90 rai when the 27-million-baht contract is completed.

“The water situation is not so bad. The Bang Wad Reservoir still has enough water to last for three more months. The rainy season normally arrives around the end of April, so there shouldn’t be any problems,” Mr Weerawat said.