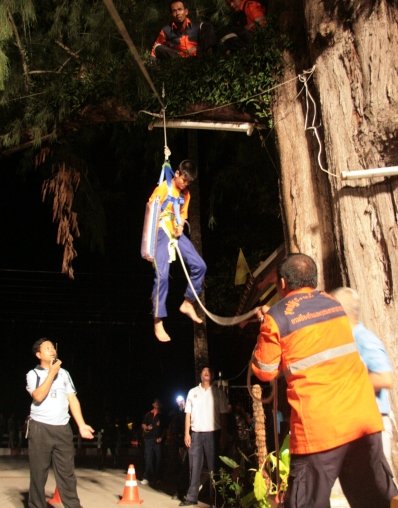 PHUKET: Phuket’s first-ever night tsunami evacuation drill last night was a qualified success, but officials say more needs to be done to ensure residents in all risk areas are truly ready to conduct an after-dark evacuation.

Last night’s drill was conducted at the Rajaprachanukroh 36 School in Kamala, just 100 meters from the high-tide mark at Kamala Beach.

Activities, from 7pm to 9pm, were presided over by new Phuket Vice-Governor Weerawat Janpen.

Organized by the Department of Disaster Prevention and Mitigation Phuket office (DDPM-Phuket) and the Kamala Tambon Administration Office, hundreds of volunteer evacuees, representatives of numerous government agencies, and rescue foundation workers took part in the drill, as well as the mock search-and-rescue maneuvers that followed.

One of the exercises saw rescue workers lower two “volunteer victims” from a tree using ropes and slings.

Many who survived the 2004 inundation in Kamala, which was particularly hard hit by the disaster, did so by scaling trees and waiting for the water to recede.

The proceedings drew the interest of the many foreign tourists visiting the area, many of whom did not know an evacuation was planned and who observed the activities with interest.

Volunteer Tourist Police were on hand to explain the situation to them.

Once the alarm was sounded at 8pm, all participants as well as many people living or operating businesses nearby moved up to the second floor of the school buildings. DDPM officers and emergency medical treatment teams searched the area for mock victims and reported back to the control center at the school.

The warning came from the school’s tsunami warning sirens only. The National Disaster Warning Center towers nearby did not sound.

The “night tsunami” exercise comes before a full-scale marine rescue and patient evacuation drill at Saphan Hin and Phuket International Airport on December 24.

Phuket Pirates: Being evil isn’t all it’s cut out to be