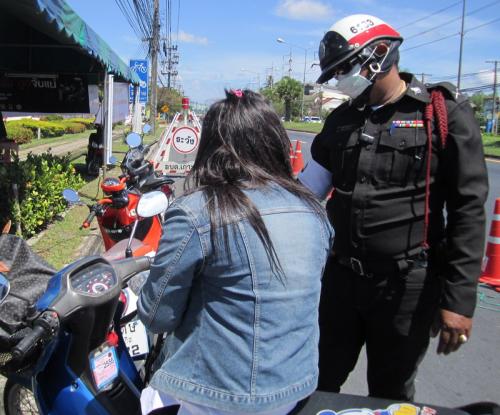 Mr Jingiang was riding an unsafe motorbike when it collided with a pickup truck in Phuket Town at 8:30am yesterday.

He suffered a serious head injury and died at 3am today, staff at Vachira Phuket Hospital confirmed to the Phuket Gazette.

The Department of Disaster Prevention and Mitigation Phuket office (DDPM-Phuket), which collates all road accident statistics in Phuket during the campaign, reported two other accidents – both also involving motorbikes – between midnight Monday and midnight Tuesday.

The second accident reported occurred at 6:20pm, when Suwin Jitamnuay, 66, from Nakhon Sri Thammarat, fell off his motorbike on Soi Thanuthep on Chao Fa East Road.

At 11:30pm, Yongyut Phornthong, 36, from Phuket, fell off his motorbike in front of the Villa Dowrung housing estate further north on Chao Fa East Road.

All of the accident victims were taken to Vachira Phuket Hospital in Phuket Town for treatment.

– Riding a motorbike without wearing a helmet – 156 people

– Driver and/or passengers failing to use seat belts – 14

– Driving under the influence of alcohol – 22

– Using a mobile phone while driving – 9