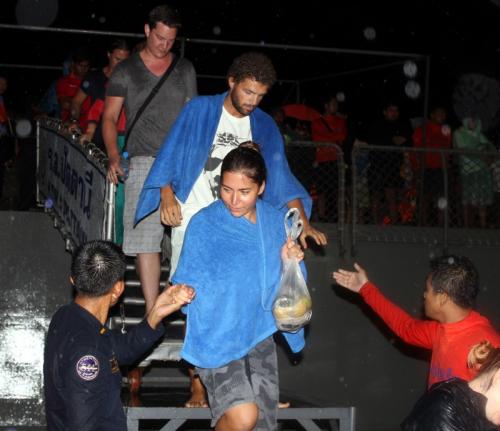 PHUKET: Tourists have heaped high praise on all those involved in the rescue of 30 people from a sinking dive boat and the safe recovery of 425 others after a severe storm left a flotilla of tour boats returning from the Similan Islands stranded at Koh Ta Chai, north of Phuket.

The 24-meter dive boat Little Princess, with 30 people on board, sank within minutes of being struck by a succession of large waves in a freak storm in the Similan National Park yesterday (story here).

The boat sank about seven kilometers off Koh Ta Chai, off the Phang Nga coast.

All passengers and crew were immediately and safely evacuated from the boat after the captain and tour leader raised the alarm, Stefan Kaesweber of Khao Lak Scuba Adventures told the Phuket Gazette.

The only injuries reported were two Thai staff members, who suffered superficial injuries, and were the last to leave the boat after ensuring that it was clear of all passengers and crew.

“In the morning, we had two dives in Koh Bon. The conditions were normal, not really fantastic weather, but not bad weather. We made two dives there because there is always one part of the island that is sheltered, where the sea is calm. The dives were great, we even saw manta rays,” explained Vivi Bernarbi who was on board the Little Princess moments before the boat sank.

As the boat headed toward Koh Ta Chai, another boat radioed that a big storm was on the rise.

“We could see the sea conditions worsening and we were taking on board some water. We tried to go back to Koh Bon, but it was even worse,” Ms Bernarbi said.

Realizing they were caught in the storm, the captain sought shelter on the leeward side of Koh Ta Chai, she added. Within minutes the waves rose from one meter to four and five meters.

As the boat turned around to head back toward Koh Ta Chai it was struck by three large waves, causing the boat to take on water and dip port side. The captain quickly raised the alarm and passengers grabbed life jackets and buoyancy control devices – and began to jump ship.

“We were really lucky that God was with us. It was so unexpected because a speedboat can easily capsize, but a boat as big and strong as the Little Princess – it was really unbelievable. I’ve been at sea many times and I would have never, ever thought we could sink, but it happened,” Ms Bernarbi said.

“Once in the water, we all stayed together and tried to give everyone encouragement… The experience was like the [movie] Titanic… I could see the boat, maybe the last three meters going down, it went so fast… it went so, so fast,” she added.

Fishing vessels in the area quickly rescued everyone from the water and from a deployed emergency raft, bringing them to one of the dive boat’s sister vessels.

“I would like to thank the fishing crew. I want to really thank them. We could see that some of them could not even swim, but they jumped into the water to try to help us,” Ms Bernarbi told the Gazette.

“The trip leader of our sister ship, all the staff and all of the guests welcomed us. And they gave us clothes, food, drink and everything we needed. And we had a kind of party because we were so happy we all made it,” she added.

In response to the SOS calls from the Little Princess before she went down, the Royal Thai Navy dispatched the HTMS Pattani, which brought everyone originally on board the sunken boat, as well as 425 others stranded on Koh Ta Chai, back to the mainland. Many of the tourists needing rescue from the island had arrived by speedboat.

“I would also like to thank the Royal Thai Navy because they were so welcoming and provided us with food and cigarettes; they even tried to cheer us up with some beer,” she added.

The Royal Thai Navy was greeted at the port by Khao Lak Scuba Adventures’s support team, which had flip-flops and towels ready in addition to minibuses that quickly transported their guests and staff to a four-star resort in Khao Lak.

Psychologists were part of the team to deal with any psychological effects caused by the incident, and the variety of nationalities on the team ensured that those involved could receive support in their native tongue, Mr Kaesweber explained.

“I really have to say the organization of Thailand Khao Lak Scuba Adventure, the navy, the fisherman, everything was so amazing,” chimed in Ms Bernarbi. “I’m Italian, and I am really very impressed. I don’t know if any European country would have been so well organized.”

Guests, who were refunded for the trip, are now being assisted in securing new passports from their embassies in Bangkok, Mr Kaesweber said.

“The owner and manager are extremely grateful to the boat crew together with all the guests who did a very professional job to evacuate the boat with no loss of life,” Mr Kaesweber said.

The Little Princess now rests at a depth of about 70 meters.

“I have no idea how much the boat is worth, but it is quite expensive because it was a proper boat fully maintained throughout the season. She was made of chrome and teak wood – there was even an ice-cube maker on board,” he added.

Attempts to locate and salvage parts of the ship will be carried out next week by a professional technical diving team, Mr Kaesweber said.

* The story originally reported that psychologists were also available for those in need. It has since been clarified that people were available to provide mental and emotional support, but none were trained psychologists.