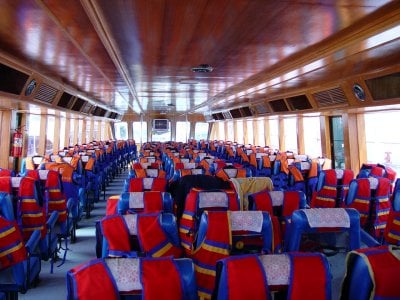 The company has invested 6.5 million baht in the project, to be served by a 200-seat ferryboat, the Pachcharat One.

The ferry will leave Mah Noh pier on Koh Yao Noi at 8 am and 2 pm, with return legs from Ao Por pier in Phuket at 10 am and 4 pm daily. All crossings will also call in at Khlong Hia pier on Koh Yao Yai.

Pachcharat One, which has an air-conditioned passenger lounge, a Muslim prayer room and a cold-storage room for food transport, was previously used by Sea Canoe on the Phuket-Phi Phi route.

The Managing Director of Sea Canoe, Koh Yao Noi native Soonthorn Sakulsan, said the service would improve safety standards on the crossing for locals and tourists alike. In the past, passengers were forced to board poorly-equipped longtail boats for lack of a better option.

Ten people died when one longtail, the Rungroj, sank in a squall on the way from Bang Rong Pier to Koh Yao Noi in March last year.

The boat was licensed to carry only 22 people but had at least 70 passengers aboard when it sank.

The new service will cost 120 baht per person, one way, with a 120-baht transport fee for motorbikes. This is considerably more expensive than the current longtail price of about 70 baht per person but, K. Soonthron said, “We discussed transport needs with local people before deciding to launch this service. They said they need safe, reliable transport year-round. Our ferry will be able to run throughout the year, including the rainy season,” he said.

“It will take Pachcharat One about 40 minutes to make the 25-kilometer crossing. That is around 15 minutes faster than going by longtail boat,” he added.

K. Soonthorn said the company plans to introduce a larger ferry next year, with capacity for cars and pick-up trucks.

Phuket to lead Thailand in e-government