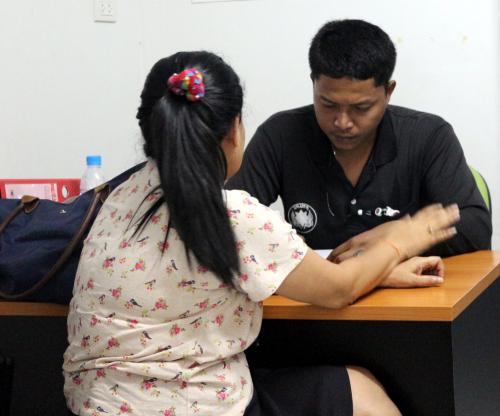 PHUKET: A woman believed by police to be entangled in an intricate Facebook scam transferred 2 million baht into a Thanachart Bank account and 48,000 baht into a Bangkok Bank account based in Phuket.

The 53-year-old woman, named only as “Ms A” by police, filed a complaint to Wichit Police yesterday after being asked to transfer an additional 2.3 million baht to a bank account in order to allegedly pay off Malaysian Customs and “international police”.

Ms A found herself caught up in the drama after meeting a man on Facebook about three or four months ago who claimed to be Nick Henry from America, explained Sub Lt Suporn Muangkai of the Wichit Police.

“At the beginning of October, Mr Henry told Ms A that he had sent her a parcel containing: a bag, a watch, an iPhone, chocolates and some money in cash. He told her that he had sent it through a logistical service,” Sub Lt Suporn said.

Ms A followed the tracking number on the company’s website.

The package appeared to go from the United States to England and then to Malaysia.

“On October 11, I received a call from a lady who claimed that she was staff from the company in Malaysia,” Ms A said.

“She told me that the parcel had been seized by Malaysian Customs, and that I needed to pay the company a 48,000-baht fee in order for them to take care of the situation,” Ms A said.

Ms A transferred the money to a Bangkok Bank account based in Wichit.

“A few days later, I received a call from a man who claimed that he was the Southeast Asia regional manager for the company. He explained that he had been contacted by international police, who had found 270,000 euros in a brown envelope inside the parcel,” Ms A said.

Ms A was informed by the man that police suspected that she might be engaged in money laundering and were pursuing their investigation of her.

“However, I was told that it all could be dealt with if I transferred 2 million baht to him,” Ms A said. “I believed the man and transferred the money to a Thanachart Bank account.”

The man called Ms A again on October 28.

“He asked for an additional 2.3 million baht. He claimed that the Malaysian Customs and international police were demanding more money,” Ms A said. “I did not have enough money left, so I talked with some of my foreign friends. They suspected I was being scammed, which is why I filed the complaint.”

Wichit Police Inspector Passakorn Sonthikun immediately contacted Phuket Immigration Police and the Technology Crime Suppression Division (TCSD) in Bangkok to see if either of them could verify if Nick Henry was in their systems.

“We will also contact Bangkok Bank and Thanachart Bank to check for the bank account details,” Lt Col Passakorn said.