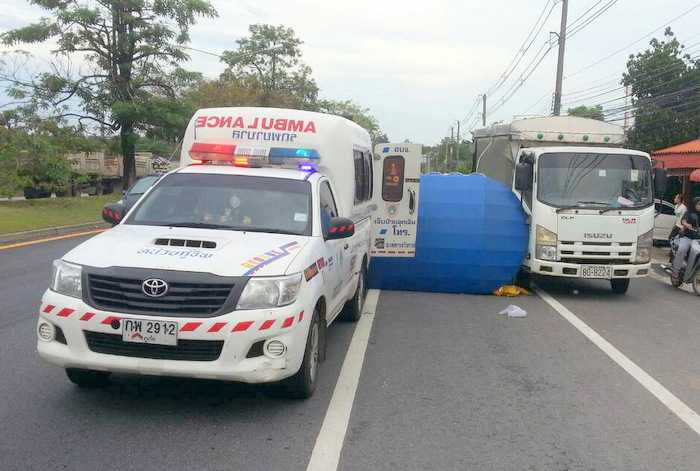 PHUKET: A 55-year-old woman’s escape from serious injury has been hailed as a miracle after her motorcycle with sidecar (saleng) was struck by an 18-wheeled semi-trailer and dragged 20 meters along Thepkrasattri Road before the saleng was struck by a second vehicle.

Wanna Damnadee, 55, was admitted to Thalang Hospital late yesterday afternoon with minor scratches and a swollen left shoulder from the accident.

“It was a miracle that she survived,” said Capt Santi Prakobkan of the Tah Chat Chai Police.

Police were notified of the accident in front of the Baan Dook Mosque in Thalang at about 5:30pm.

“I was shocked and I couldn’t stop in time,” he said. “The trailer hit the saleng right in front of me, but the truck kept going. I didn’t even have time to take the license plate on the trailer.”

Capt Santi said that he was in the process of compiling descriptions of the 18-wheeler from witnesses, including Mr Kyaw, in the hope of tracking down the hit-and-run driver.

“We have yet to decide whether to press any charges against Mr Kyaw,” he added.