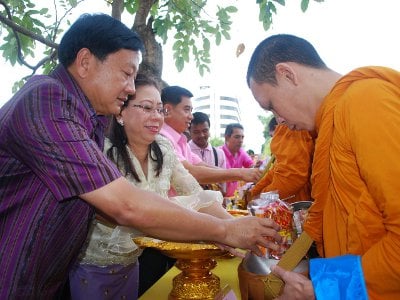 The ceremony, which got underway at 7am, was presided over by Phuket Governor Tri Augkaradacha and his wife Mrs Nalinee Augkaradacha in her capacity as president of the Thai Red Cross Society Phuket chapter.

The event was just one of many taking place on the island today, a public holiday when people from every walk of life celebrate the birthday of His Majesty The King. The day also serves as Fathers’ Day in recognition of HM The King’s role as patriarch and unifier of the Thai people.

In a show of compassion, HM The King today issued a royal command pardoning some 26,000 prisoners nationwide. The decree, signed by His Majesty, was based on the one initiated last year by the Democrat Party-led government.

In a statement published in the Royal Gazette, His Majesty said the convicts should be given a second chance. This year’s pardon included inmates convicted on drug charges whose sentences were not longer than eight years.

The first batch of 12,000 will be released on Thursday and the rest will be freed gradually, said the director-general of the Department of Corrections, Pol Colonel Suchart Wonganantachai.

In a Dusit Poll released on the occasion of HM the King’s birthday, pollsters asked people what aspect of the HM The King’s kindness they most appreciated.

Asked what activities they would like the public to participate in on the occasion of His Majesty’s birthday, most respondents (61.4%) said “lighting candles and singing songs wishing HM well”. This was followed by donating blood and supplies to foundations related to him (22.7%) and participating in activities organized by state agencies (15.8%).

The Phuket festivities continue today with the final night of the Phuket World Musiq Festival at Saphan Hin in Phuket Town. Tonight’s entertainment will begin with a performance by the Nakhon Phuket Youth Orchestra beginning at 5pm. The final performance, “Phuket World Celebration”, will feature Todd Thongdee Lavelle and fellow musicians, including National Artist Naowarat Pongpaiboon, leading all in the original “Father of Love” celebration in honor of His Majesty.

The Phuket Gazette is a proud sponsor of this Royal Tribute event and joins all of Phuket in wishing HM The King a happy birthday. Long Live the The King!