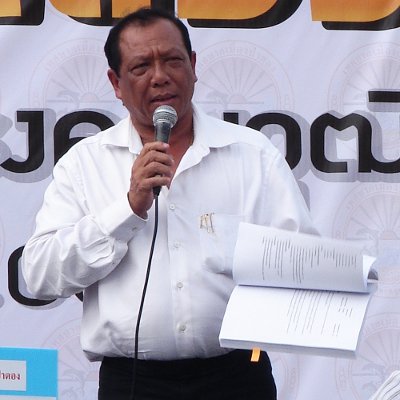 PHUKET: Patong Mayor Pian Keesin told a crowd of supporters recently that he expects work on the Patong Tunnel Project to begin in 2013.

Speaking at a “Patong Future Plan” public rally at Patong Sports Field on the beach road earlier this month, Mayor Pian presented his plans for easing problems that have arisen from the fast pace of development in recent years.

“Patong people rely on tourism. Sustainable tourism development for me means ensuring the safety of both tourists and investors. The tunnel will help prevent accidents, save fuel costs, and save lives from car accidents. Kathu Police recently told me seven people have died this year while coming over Patong Hill,” he said.

Strong opposition to the project developed in the Ban Mon area of Patong after it was announced that an elevated roadway would need to be built in that area and that some villagers would have their land expropriated.

That Ban Mon villagers filed a formal complaint over the tunnel project with former Governor Wichai Phraisa-ngop last month was “good for Patong” in that it would increase government interest in issues affecting the town, he said.

In Mayor Pian’s opinion, the villagers did it because they misunderstood the the land expropriation process.

“About 10 landowners, of which six are local Patong residents, will be affected. They will get a very fair rate.”

According to the latest Royal Decree on expropriation, effective from June 10, they will even be paid for the trees on their land, he said.

About 300 of the 400-strong crowd who turned up for the rally were members of the Patong Entertainment Business Association and Patong Taxi Federation. There were no Ban Mon villagers in evidence.

During the event, Mayor Pian also announced that a decision would be made within the next two months on whether to change the controversial one-way traffic system that has been in effect in Patong since January 2007.

Upon taking over as Kathu Police chief in March, Col Arayapan Pukbuakao said the current system not only confuses people, but also violates Thai traffic law.

At the rally, Mayor Pian also called for the Patong Taxi Federation to help set up a central depot where all taxi service vehicles would remain until tourists asked for one at any of the taxi ranks located throughout the town.

This would help solve the parking problem along the beach road, he said.