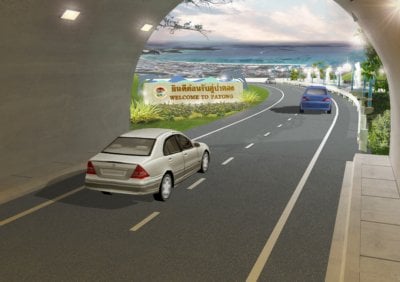 PHUKET CITY: A 40-million-baht feasibility study into the possibility of constructing Phuket’s first road tunnel has come up with three options for planners to consider.

According to researchers’ preliminary findings, the proposed tunnel between Kathu to Patong would cost between 1.16 and 2.48 billion baht.

Main contractor Epsilon Company Ltd is working with experts from PlanPro Corp Ltd and Kasetsart University to carry out the 15-month study, which got underway in July.

PlanPro will study traffic flow and the possibility of private funding under a build-operate-transfer agreement, while the Kasetsart University Faculty of Engineering team will help prepare the project’s environmental impact assessment report.

Phuket Vice Governor Smith Palawatwichai chaired a meeting at Phuket Provincial Hall on Friday to hear the first findings of the study, which was funded entirely by Patong Municipality.

The Patong Tunnel road could take three different routes, all of which could accommodate either a two- or four-lane road, the researchers said.

The final report, scheduled for submission in October next year, will include cost estimates and a determination of which, if any, of the three routes under consideration is viable.

The first option would be a 1.44 kilometer tunnel, the access road to which would be a left hand turnoff from Phra Barami Road in Tambon Kathu, near the go-kart track.

The total length of the new road, which would end in Patong near the junction of Phisit Gorani and 50 Pi roads, would be 2.27 kilometers. The cost would be about 1.3 billion baht for a two-lane road and 2.48 billion baht for a four-lane road, according to the consultants.

The second option would start in the same location but end in Patong near the APK Resort on Phang Muang Ruam Sai Kor Road, commonly referred to as ‘the new road’.

The third and most striking option would have Patong-bound motorists enter an access road past the go-kart track, then enter a 450-meter tunnel that would pass under the existing Phra Barami Road.

After leaving the tunnel high up in the hillside, traffic would be routed via a 450-meter elevated roadway that would pass over a real estate development and then back over Phra Barami Road, not far from where a large sinkhole appeared during a rainstorm last August.

The route would end in Patong near the junction of Phisit Gorani Road with 50 Pi Road.

Total road length would be 2.35 kilometers.

Public hearings will be conducted soon, with the results to be included in the final project recommendations.

“Whichever route is chosen, I think it will increase safety and promote Phuket tourism,” Mayor Pian told the gathering, adding that he hoped to attract foreign investment for the project.

Mayor Pian also floated the idea of establishing parking areas at both ends of the tunnel route so that commuters could use an unspecified public transport option.

Col Grissak said the existing Patong Hill road has been the site of numerous accidents during his two-year tenure as chief of the Kathu Police.

“The traffic on the hill road is very bad, especially when it rains. Even one car conking out can cause a two-kilometer tailback very quickly…. If you want to go to Patong, you must make sure that your car and driving skills are sufficient,” he said.