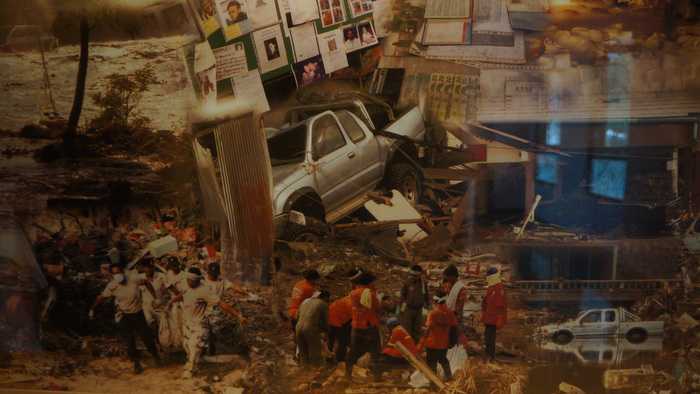 PHUKET: The world’s eyes will be on the Andaman coast tomorrow, as Thailand and the region honor the victims of the Indian Ocean Tsunami, which devastated the region’s coastline on December 26, 2004.

Services will be held at the Tsunami Memorial Wall in Mai Khao, on Patong Beach, and in Khao Lak in remembrance of the more than 5,000 people who died, and the nearly 3,700 who still remain unaccounted for.

A multi-denominational service will begin in Mai Khao at 8:30am.

“After the religious ceremonies, attendees will approach the wall and lay wreaths in memory of those who were lost.”

The annual “Light Up Phuket” ceremony will be held across from Loma Park on Patong Beach. Thousands are expected to join the event, which involves lighting candles and building sand sculptures in memory of the tsunami victims.

7:45pm: A moment of prayer, followed by one minute of silence

8:10pm: Singers from 10 countries take part in the song “Wonderful Grace of Jesus”

At 5pm, an official ceremony chaired by Prime Minister Prayuth Chan-ocha will lead foreign envoys in honoring victims of the tsunami at the Patrol Boat Tor 813 Memorial.

The Prime Minister’s speech will be followed by a minute of silence and a wreath-laying ceremony.

A video presentation about the recovery of affected areas will then be shown, demonstrating how communities in the Andaman have adjusted and developed emergency response steps in case another tsunami strikes.

Following the presentation, there will be a series of speeches from international guests and a poetry reading. The evening will conclude with another candle-lighting ceremony.

For an in-depth understanding of the devastation, the recovery process and the steps taken to save lives in the future, pick up your copy of the Tsunami 10th Anniversary Remembrance publication, produced by The Nation, the Phuket Gazette and the Asian News Network.

Hard-copies of the 40-page supplement will be available inside the December 27- January 2 Phuket Gazette, out on newsstands tomorrow. The stories and photos from the publication can be found online at the Asian News Network special webpage, here.