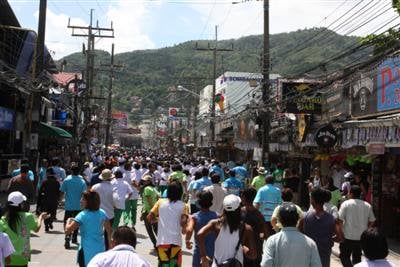 The exercise was all part of a full-scale tsunami warning and evacuation drill, which Deputy Prime Minister Suthep Thaugsuban pronounced a resounding success.

“This will help tourists trust our tsunami warning system and encourage them to return to Phuket,” he said.

The exercise was based on the hypothetical scenario that a massive earthquake of magnitude 8.8 struck near the Andaman Islands at 10:20am.

The National Disaster Warning Center issued a warning that a tsunami might strike the six Andaman coast provinces and warned residents and tourists to immediately evacuate to safe areas within 20 minutes.

In Patong, people at the beach ran up Soi Bangla, away from the sea.

Volunteers pretending to be frightened tourists climbed coconut trees and electricity polls, while others climbed up to get them down and send them to higher ground.

Other volunteers swimming in the sea were picked up by Royal Thai Navy helicopters and safely dropped off safely on shore.

One Canadian tourist told the Gazette he was impressed with the professionalism of those who took part.

“A tsunami could hit Thailand again, but Thailand seems well prepared with the warning system and evacuation plan,” he said.

“Lots of people took an interest and joined in the drill. It was just like a real situation,” Deputy Prime Minister Suthep said, adding that, “It wasn’t just government employees who took part. Everyone took the practice seriously. Everything went perfectly today.”