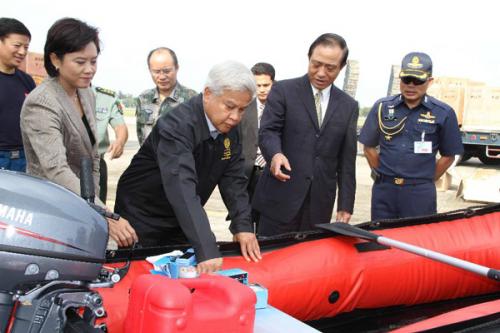 PHUKET: The Chinese Ambassador to Thailand has placed tourists’ safety and security at the top of his agenda for his visit to Phuket tomorrow, the Phuket Gazette has learned.

“The Chinese Ambassador and his team are going to discuss Chinese tourists’ safety and security in Phuket,” Sanyalak Yoorak, personal secretary to Phuket Governor Maitri Inthusut, told the Gazette.

“We do not know the exact details of what they are going to talk about, but that is what we have been informed,” he said.

The meeting will be held at 2pm at the Phuket Graceland Resort and Spa in Patong, Mr Sanyalak added.

Ambassador Guan Mu’s visit is to precede a delegation of representatives from European countries who will meet with Governor Maitri on June 14-15 to discuss similar issues affecting foreigners living in or visiting Phuket.

That meeting is scheduled to be held at the JW Marriott Phuket Resort & Spa in Mai Khao, Thalang.

“We have not yet received official confirmation of which countries will be sending delegates,” Mr Sanyalak said.

“We were just informed that representatives from only seven to eight EU [European Union] member countries will be here,” he said.