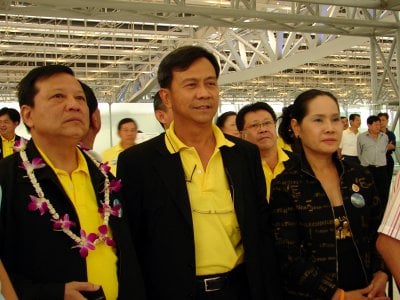 With some 20 VIPs and members of the media from Phuket on board, Thai Airways International (THAI) flight TG 1882 took off at 11:29 am and landed at Suvarnabhumi at 12:59 pm.

As the 375-seat Boeing 747-400 touched down, the passengers applauded Captain Werasak Wiroonpetch for a safe landing and peered at the new buildings through the windows.

After disembarking the aircraft, the group was given a three-hour tour of the airport, which cost more than 155 billion baht, took 4½ years to build, and occupies an area of 20,000 rai.

The airport is scheduled to open for regular flights on September 28.

Phuket Vice-Governor Niran Kanlayanamit said, “This is good for tourism, especially when we promote on our road shows that Thailand has an airport with the latest technology, and Suvarnabhumi is big enough to support the airlines that plan to come here.”

Pattanapong Aikvanich, former President of the Phuket Tourism Association (PTA) and still an adviser to the organization, was clearly impressed.

“I’m very happy that Thailand has a very big – and very beautiful – airport. It can serve up to 45 million passengers a year and within the next two years it will be expanded to cater to double that number, which is a big improvement.

“At the same time, Don Muang International Airport can serve 36 million people a year. Together, nearly 100 planes can be on the ground at the same time, which is good for tourism,” he said.

However, he added, “I think the central government should improve the other airports in Thailand, too, because flights should connect and not just create air traffic to [Bangkok]. Main cities in each region should have a big airport such as this.”

As an aside, K. Pattanapong noted, “It’s a pity that the Sky Train will not be picking up passengers from the airport for the next two years. That service should start when the airport opens in September.”

Phuket City Municipality Mayor Somjai Suwannasupana was proud of the image Suvarnabhumi airport gives tourists arriving in Thailand. “I’ve been to many countries and I think this is the only airport that clearly has an identity. The decoration truly shows Thailand’s culture,” she said.