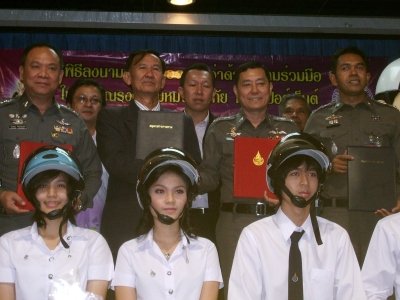 PHUKET: Staff and students of Prince of Songkla University (PSU) Phuket campus are now liable to punishment by the university if they are caught traveling by motorbike without a helmet.

The new provisions were introduced by the signing of a Memorandum of Understanding (MOU) at the PSU campus in Kathu on September 1.

With some 200 students present as witnesses, the MOU was signed on behalf of the university by its vice-president Dr Methi Sunbhanich. Signatories for the police were Phuket Provincial Police Commander Pekad Tantipong, Phuket City Police Superintendent Wanchai Ekpornpit, and Thung Thong Police Superintendent Kraithong Chanthongbai.

Under the MOU, each month police will report to university administrators all PSU students and staff caught not wearing helmets while traveling by motorbike in Phuket City or Thung Thong Police districts.

The university administrators will then consider appropriate punishment for offenders.

For a first offense, students will either have 10 hours of accredited “university activity” participation stricken from their record or be made to perform 20 hours of community service.

PSU students must accumulate at least 100 hours of university activities in order to graduate.

In addition, the university will notify parents of the incident(s).

First-time offenders among PSU staff will not be required to watch the infamous road-safety film at Phuket City Police Station, but will be issued official police warnings. Infractions will be marked on police records and shared with the university, with violators subject to warnings from supervisors.

These punishments will be in addition to normal penalties incurred under traffic law.

Repeat offenders will have to watch the road-safety movie. Any staff or students who accumulate more than 40 “demerit points” issued by police for road traffic violations may be subject to further punishment by the university.

Although traffic law allows a total of 100 demerit points before driving privileges are revoked, PSU staff and students who accumulate 60 or more demerit points will be suspended from driving for 90 days.

“PSU is a famous university. The students are preparing for leadership roles in society and one characteristic of a good leader is having a good sense of social responsibility and abiding by the law,” Dr Methi said.

Col Wanchai said that PSU was the fifth school to sign an MOU with police.

From its start in early July, some 2,560 helmet-law violators have watched the road safety movie produced by Phuket City Police, said Col Wanchai, who is the driving force behind the “100% helmet use” campaign.