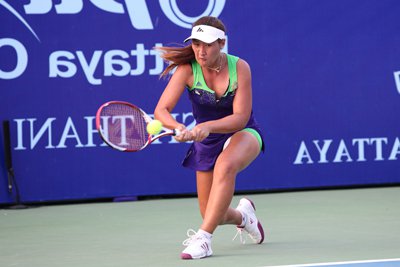 With a growing reputation as a top international sporting destination, this tournament is set to become one of the region’s key events using TSLC’s world-class facilities.
Boasting six state-of-the-art covered and floodlit Plexicushion tennis courts the same surface used at the Australian Open – and stadium seating for more than 600 people, TSLC is ideally equipped to host a tournament of this caliber.

“We couldn’t be happier following the decision to hold the event at TSLC. Thanyapura’s vision has always been to create world-class facilities in paradise, believing that if we build it, they will come. Well, now the ITF has come, and I believe this is just the beginning of a relationship that will go from strength to strength,” he said.

“In the future, given our facilities and the allure of Phuket, this could well become one of the biggest tournaments on the women’s [ITF] calendar. It will have a great flow on the effects for Phuket as a whole in terms of visitors and sports tourism, and it will also give Thanyapura’s Tennis Academy a great chance to groom its own stars of the future and introduce them to the big stage. I also believe that Thanyapura has the potential to become a major training base for world-class players, given its climate, accessibility and lifestyle,” he added.

The tournament will comprise a main draw of 32 ranked players, with another 32 selected through qualification rounds. Thailand’s Noppawan Lertcheewakarn, who won the junior singles title at Wimbledon in 2009 and is currently ranked at 179 in the world will be competing. She is the only Thai to make the 32 main draw places. Varatchaya Wongteanchai ranked 215 will also be participating. She won second in the ITF Circuit doubles title in 2011.

Other players include world number 138 Erika Sema and world number 144 Kurumi Nara, both from Japan, as well as Peka Luca Jani from Hungary (155), Julia Cohen from the US (158), Claire Feverstein of France (163), and Sarah Gronert of Germany (175).
This will be the second ITF tournament hosted at TSLC following the Chang ITF Thailand Pro Circuit 2011 men’s tennis tournament held at the facility last October and November, to great acclaim.

A TAT spokesperson said the organization was proud to be supporting such a prestigious event as it was a key goal of the TAT to promote sports-related tourism, and this was a perfect vehicle to draw international attention to the destination and its impressive facilities.

For more information on this ITF event visit Thanyapura.com.