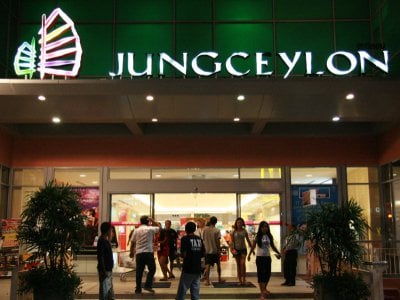 PHUKET: Phuket authorities are investigating a formal complaint that police officers are pandering illegal alien prostitutes to foreign tourists in the basement shop area of an upscale shopping mall in Patong.

The investigation follows a recent complaint lodged with the Damrongtham Center at Phuket Provincial Hall by a person identified only as “a Patong Person”.

The complaint alleges that members of the Patong Police, some on plainclothes duty, are trafficking women from Burma, Cambodia and Laos to work in the local sex trade.

The complaint alleges that the racket is being carried out in the “That’s Siam” section in the basement of the upscale Jungceylon shopping plaza.

According to the complaint, one particular officer is paid 3,000 baht to 5,000 baht for each woman procured, allegedly with the tacit approval of some higher-ranking officers.

The officer in question sets up meetings between prostitutes and potential clients at a variety of locations, such as restaurants and massage parlors, all over Patong, the meeting was told.

One of the establishments allegedly used for meetings was less than 100 meters from Patong Police Station, V/Gov Somkiat said.

Prapan Kanprasang, head of the Damrongtham Center, said a task force had been assigned to investigate the accusation.

He said anyone with information or complaints can lodge them with the Damrongtham hotline (Tel: 1111) or through its website: www.1111.go.th

“After we receive a complaint, we must appoint authorized officials from relevant agencies to ensure fairness to both sides,” he said.

V/Gov Somkiat said, “We don’t intend to take sides. In fact I like hanging out at Jungceylon. For now, we will instruct Jungceylon to inform its shop owners to check the status of all their migrant workers.

“We will give them 15 days to act. After that we will have an authorized team check on compliance,” he said.

V/Gov Somkiat said he understood that Jungceylon rented out retail space to a large number of tenants.

“That’s why we have to inform them first because they know which shops have migrant workers,” he said.

Governor Tri Augkaradacha would be kept informed of developments in the investigation, he said.

More haze may be heading for Phuket