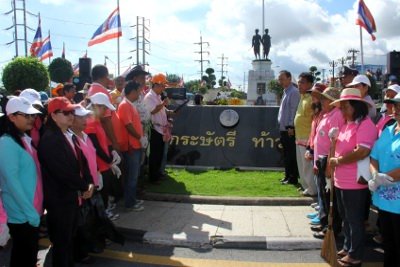 PHUKET: Residents in Phuket’s Srisoonthorn area today staged their “Big Cleaning Day” to prepare for the upcoming Vegetarian Festival, which will get underway on Sunday night.

Leading an army of volunteers and officers from Srisoonthorn Municipality was the local mayor, Worawut Songyot.

“This area must be well-cleaned to welcome people coming to Phuket. A lot of people will come for the Vegetarian Festival, and Srisoonthorn Municipality is the main area that people must drive through to get to Phuket Town.

“Also, many people already come to the Heroines Monument to pay their respects, and a lot more will come during the festival as it is one of Phuket’s main attractions,” Mayor Worawut said.

He praised the large turnout by local residents in the united effort to clean the streets.

“It proves that local residents and government officers can get along and are ready to keep their neighborhood clean,” Mayor Worawut added.

Chief Administrative Officer (Palad) Somjai Thongsombat explained that the Heroines Monument was the “epicenter” of the cleaning effort.