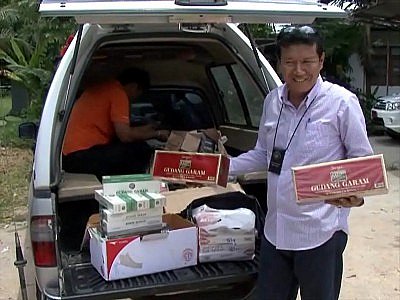 PHUKET: Officials from the Phuket Excise Office yesterday seized 956 packs of illegally imported cigarettes and packs of tobacco with a total street value of about 100,000 baht.

Most of the contraband was imported by post, said Excise officer Chingchai Borwornthanasan.

Three people were arrested in the raid: Yusaree Yun from Pattani, and Ussamarn Wangdee and Je-padeemoh Yun, both Phuket natives.

In the stash were brands including Absolute, Gudang Garam and Baragu, among others imported from Malaysia, Indonesia and India.

Surat Sangnet, head of suppression at the Phuket Excise Office, said the raid on shops in Moo 3, Pa Khlok followed a week-long investigation by Excise officers.

All three suspects were charged with being in possession of untaxed cigarettes and tobacco with intent to sell.

If convicted, each of the three face a fine of up to 15 times the tax not paid – or a jail sentence.