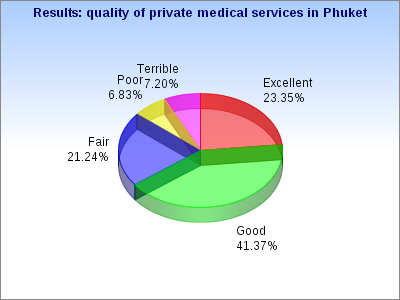 PHUKET: A majority of Phuket Gazette on-line readers have a favorable opinion of private health-care services in Phuket, the results of the latest Readers’ Poll reveal.

“With two international hospitals and numerous private clinics, Phuket has been much touted as a medical tourism hub. Cost considerations aside, how would you rate the overall quality of service at these facilities?”

A breakdown by demographic revealed that people who identified themselves as “local foreign residents” had the most favorable view, with 64% saying the private medical services on the island were positive (“excellent” or “good”) compared to just 11% who said they were “poor” or “terrible”.

A majority of Thais also held a favorable view: 33% positive, 23% negative and 16% fair. However, 29% of Thais answered that they didn’t know because they had never used private medical services in Phuket.

A similar trend was observed among voters who identified themselves as “tourists” or “visitors”. Of these, 44% said they had never used private medical services on the island. Of those that had, most had favorable reviews: 35% positive compared to 9% negative, with 12% rating them as “fair”.

Overall, 345 people took part in the poll, which was introduced on Wednesday.