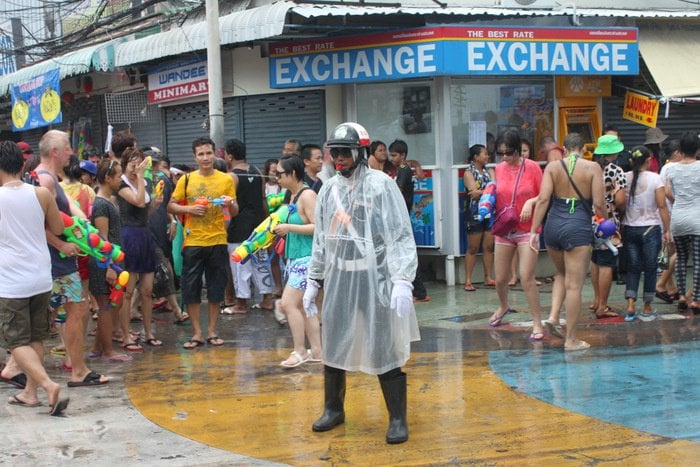 PHUKET: Police have warned that drunk revellers and people caught drinking alcohol in water-play zones across Phuket during the Thai New Year Songkran holidays next week will be removed from the zones and may face charges.

“This includes Soi Bangla, in Patong,” he said. “If you want to drink, do so in the bars, but do not carry your drinks into the street. People behaving drunk and disorderly will be removed and may face charges, depending on their behavior.”

The warning follows Phuket City Police Superintendent Col Kraithong Chanthongbai announcing on Wednesday a raft of banned behaviors for the new year celebrations, to be observed nationwide on the two main days: April 13-14.

Banned for this year is the wearing of sexy outfits; the sale, purchase and drinking of alcohol in water-play zones; mixing powder, ice or foam with play water; high-pressure water guns and other dangerous devices; water-fight trucks and sexy dancing (story here).

The move to ramp up policing during the holidays is for safety and to promote traditional ways of celebrating Songkran, Col Teeraphol said.

“All of these rules are for your own safety,” he said. “Dressing appropriately, especially for women, is hoped to avoid them attracting the attention of people who may take advantage of them during the festival. The same applies for the ban on sexy dancing.

“Drinking in public is also not safe. Even more dangerous is drunk driving. We will be very strict on drunk drivers during the festival.”

Anyone who is caught drinking and driving will be charged. The penalty for drunk-driving is imprisonment for up to six months, fined up to 10,000 baht, or both (story here).

“Police will charge people for throwing water impolitely, for using colored water, and for touching women inappropriately when applying powder,” he said.

“Whoever breaks these regulations will be charged with causing a public nuisance or endangering public safety.”

Despite the tighter control on revellers’ antics, Governor Nisit wished one and all a happy Songkran.

“I hope everyone enjoys their Songkran holidays in Phuket, and of course do not drink and drive and please follow the rules. Police will keep an eye on public safety, especially in the play zones,” he said.

“I have ordered local government offices to introduce their own safety measures for the holidays, including to take steps to regulate traffic during the period, especially on the hills.

“Be safe and I wish you a happy Thai New Year.”