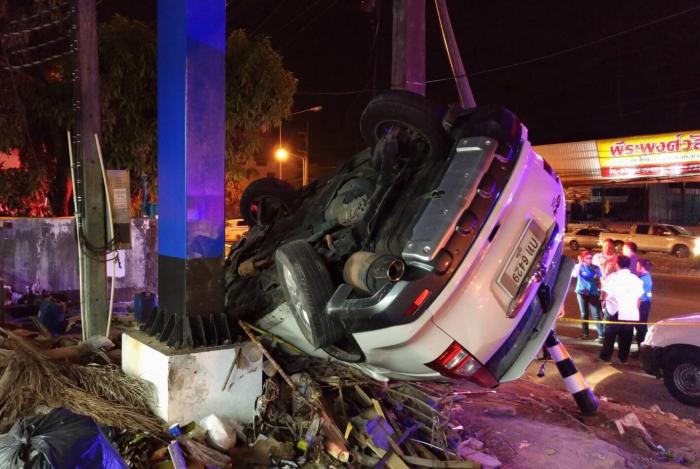 PHUKET: Yet another ‘drowsy’ driver and his two passengers were injured yesterday morning when their vehicle overturned near a Koh Kaew gas station.

“We found an upside down Honda CRV stuck to a power pole near the PTT station on Thepkrasattri Road. All three occupants were trapped inside the car and rescue workers had to use Jaws of Life to cut them loose,” said Capt Udom Petcharat of Phuket City Police.

After the SUV was lifted from the footpath, police discovered a flattened saleng (motorbike with a sidecar) that had been parked at the spot.

“Witnesses told us that they saw the SUV speeding on the right lane. It suddenly cut to the left, jumped the curb and crashed into the saleng and power pole,” he added.

“The 37-year-old driver, Prawit Prakanpai, was driving back from a staff party with two friends. Since the incident took place at about 1am, we believe he might have fallen asleep at the wheel.”

Mr Prawit still remains at Vachira Phuket Hospital, while the two passengers were discharged this morning. Police are trying to identify and locate the saleng owner.

“We have not yet charged anyone for the incident. We will question Mr Prawit when he recovers,” the captain told Phuket Gazette reporters.