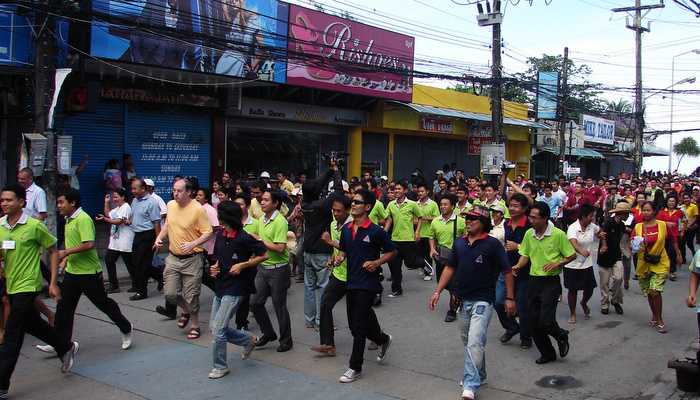 PHUKET: Phuket officials have postponed a full-scale tsunami drill that was planned for Christmas Day, following a number of complaints from victims’ families who are preparing for the 10th anniversary of the tragedy on Boxing Day.

“We have cancelled plans to hold the full-scale drill on Christmas Day after receiving feedback from the victims’ families, who feel that the drill will bring back bad memories,” said Santhawat Riwleung, chief of the Department of Disaster Prevention and Mitigation (DDPM) Phuket office.

The drill was initially scheduled to be held on December 25 (story here), but Governor Nisit Jansomwong later said that he was considering postponing the drill after foreigners filed complaints with him saying they didn’t want to witness a full-scale drill so close to the 10th anniversary day (story here).

“Governor Nisit understands that the timing of the drill is sensitive, so he has ordered it to be rescheduled,” Mr Santhawat told the Phuket Gazette yesterday.

Instead of the full-scale drill, Patong Municipality will hold a number of indoor events at a local hotel for emergency response staffers on Christmas Day.

“A seminar entitled ‘Phuket: Ready for a Tsunami 10 Years On’ will be held in the morning. It will be followed by an indoor drill for emergency response units from relevant departments in the afternoon,” Mr Santhawat explained.

An official date has yet to be set for the full-scale drill, but will take place in the new year, Mr Santhawat confirmed.

“We will, of course, announce the date well in advance, so that Phuket residents are aware of what’s going on. Hotels will also be contacted about it, so that they can inform their guests,” Mr Santhawat said.