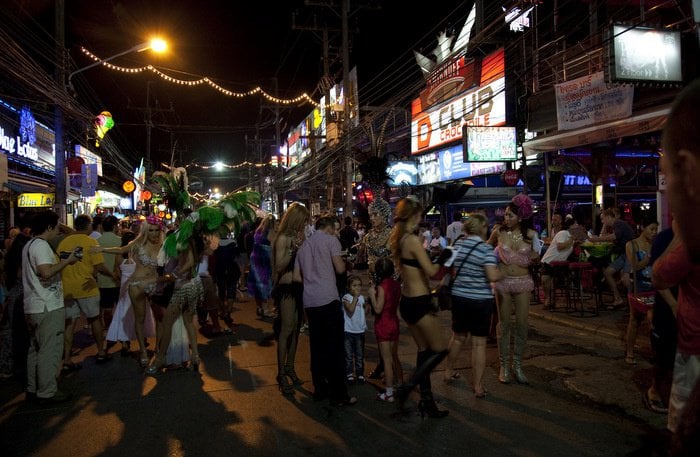 PHUKET: Management from the White Room Night Club in Patong today denounced the violent actions of five of their bouncers in a confrontation with six Australian tourists last night.

A video of security guards brutally beating two of the Australian tourists was shared on Facebook and quickly went viral.

“We, the management of White Room Night Club, are shocked and upset by the violent incident. We strongly reject all forms of violence and we are currently reviewing the necessary measures to ensure nothing like this will ever happen again,” management wrote in a statement to the Phuket Gazette.

“Needless to add, the culprits of this despicable act have had their employment at White Room immediately terminated.”

Meanwhile, Patong Police are on the hunt for the six Australian men, who have yet to file a complaint with police.

The five bouncers, who police have declined to name, have already been questioned by officers.

“We learned from the guards that the six tourists were from Australia and had come into the club to have a drink,” Lt Col Pongpichan Chayanonpiriya of the Patong Police told the Gazette.

The guards claimed that when the bill came, the six tourists denied having any drinks and argued with the waiter.

“The tourists ignored the waiters and danced. Some of them took off their shirts and were being disruptive. Therefore, security asked them to leave the club and pay for their drinks,” Col Pongpichan said.

The guards claim that the men started to become aggressive and hit one of them [a guard] in the face after leaving the club.

“The security guards then fought back as seen in the video,” Col Pongpichan noted.

The video – since removed from the Facebook page – showed the guards brutally beating the tourists to the ground and kicking them in their chests and heads.

Police are in the process of contacting the Australian Embassy to see if any report of the incident has been filed with there.

“At this stage, we have not pressed any charges against the security guards, as we have only heard one side of the story,” Col Pongpichan said. “We will continue to search for the six Australian tourists.”

“Right now we do not want to blame the nightlife operators or the tourists. If police can find the men, I’d prefer to see both parties negotiate so that everything will be cleared up,” Mr Weerawit said. “We will be careful and do our best to prevent this from happening again.”