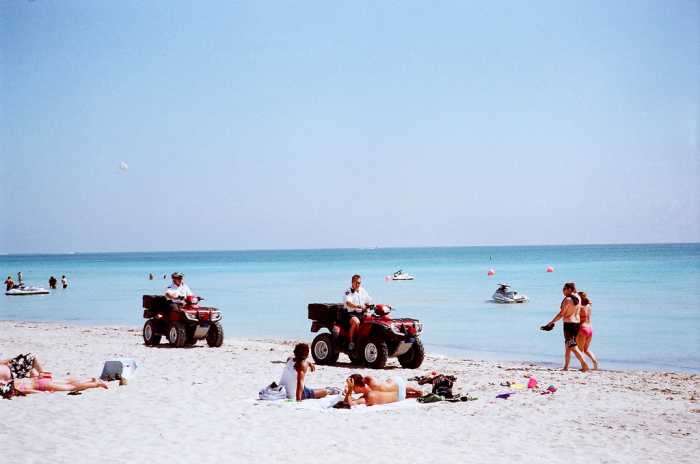 “We are now working on setting up Beach Police squads for every beach in Phuket,” Provincial Police Commander Patchara Boonyasit told the Phuket Gazette.

“The officers will have their own uniforms – shorts with short-sleeved shirts – so beach-goers can easily identify them, and the officers will ride pushbikes to conduct their patrols.”

The ranks of the beach squads will be drawn from officers already stationed in Phuket, Maj Gen Patchara explained.

As the Beach Police officers will be regular officers assigned special beach patrol duties, they will have the power to arrest while on duty, he added.

Phuket’s future Beach Police squads will add to the ranks of bicycle patrols in other coastal cities like those found in Australia. Photo: New South Wales Police

Phuket’s valuable contingent of foreigners who assist as police volunteers are welcome to join the patrols.

“Phuket has a strong team of police volunteers, especially foreigners,” Gen Patchara noted. “I have yet to set a date for launching the project. However, it will be as soon as possible once we have everything ready.”

Gen Patchara added that he had expressed concern about the safety of tourists and other visitors at Phuket’s beaches to Governor Nisit Jansomwong and to Phuket Provincial Administration Organization (PPAO) President Paiboon Upatising.

“Mr Paiboon agreed for the PPAO to install more lights and CCTV cameras at the beaches, and to provide 19 ATVs for local police officers – not Beach Police – to use in case they need to chase any criminals in beach areas,” he said.

“I have no idea when Mr Paiboon will be able to install the CCTV and lights and provide the ATVs. The ATVs alone will cost 1.5 million baht.

“However, I said to him that safety cannot wait, and he is aware of that.”

The move to launch the Beach Police patrols follows former Region 8 Police chief Panya Mamen ordering all police stations under his command, including those in Phuket, to investigate their options for improving tourists’ safety following the brutal slaying of two British tourists on Koh Tao earlier this year (story here).

The order was handed down to all police stations in Region 8, which In addition to Phuket includes Krabi, Phang Nga, Ranong and Surat Thani, where British tourists David Miller and Hannah Witheridge were murdered on September 15 (story here).