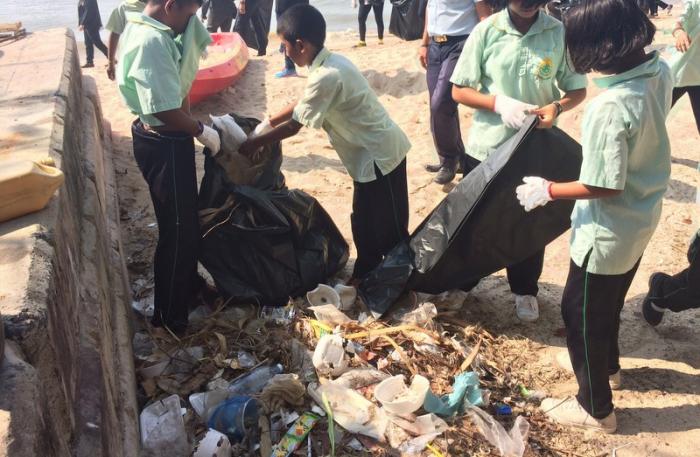 PHUKET: Officials from the Ministry of Natural Resources and Environment (MNRE) joined hands with locals, students and sea gypsies in a trash collection effort at Koh Sireh this morning.

A team of 150 people, including Phuket Vice Governor Sanith Sriwihok and Somchai Maisatian of the MNRE, gathered at Laem Tukkae Beach at about 10am.

“The focus of this campaign is involvement of locals. Trash is one of the biggest issues facing our society today. Without proper management, it will cause problems in other aspects of public life, including health, environment, marine life and so on. It is important that the public realizes the importance of keeping the environment clean,” said Mr Somchai.

“Once they understand that, they will not only help each other to clean up the community, but also stop producing uncontrolled amounts of trash. This will definitely help improve the overall situation in Phuket,” he added.

Last month, all coastal provinces in Thailand were given a budget for marine debris management after Thailand was ranked as the sixth worst marine polluter in the world by the United Nations Environmental Program (story here).

As part of the project, trash collection efforts at Koh Racha and Laem Sai led to more than 1,600kg of marine debris being collected and properly disposed (story here).

Today’s campaign, though not officially under the same banner, was meant to supplement efforts in this regard.

Vice Governor Sanith said that it was important to manage debris on both land and water.

“We will continue to keep a close eye on the issue of trash collection and management in Phuket. There are several campaigns to educate people and prevent them from littering. I think that if everyone helps each other, we will be able to return Phuket to its natural beauty in no time,” he said.

‘Slippery roads’ claim yet another victim in Phuket