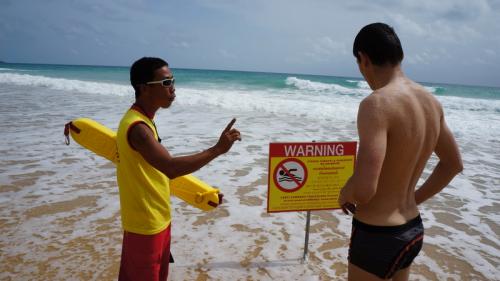 PHUKET: In the aftermath of Phuket’s deadliest beach weekend and the first-time-ever forced closure of sections of beaches by lifeguards, the Phuket Lifeguard Club’s contract with the local government has been renewed, but only for 10 months (story here).

“The contract was renewed on June 28 and will last for 10 months,” an officer at the Phuket Provincial Administrative Organization (PPAO) Tourism Department told the Phuket Gazette today.

The new contract stipulates that an additional five lifeguard watch stations be established along Phuket’s popular west coast as proposed in May (story here).

The additional watch stations will be at Kata, Kata Noi, Karon, Patong and Kamala beaches.

“It is very important that the longer beaches that have strong currents such as Kata have the additional lifeguard watch stations. In the past the stations have been too far apart,” the officer said.

Despite the increase in the number of stations being manned, the budget has remained the same. To balance the lack of an increase in the budget for this essential life-saving service on the island, the PPAO has agreed for the contract to be only for 10 months.

“The waves will be strong during these few months, so do not attempt to swim when red flags are posted,” said Mr Prathaiyut

“If you want to swim, please notice the areas where yellow flags are posted or check with lifeguards on duty before getting into the water,” he said.