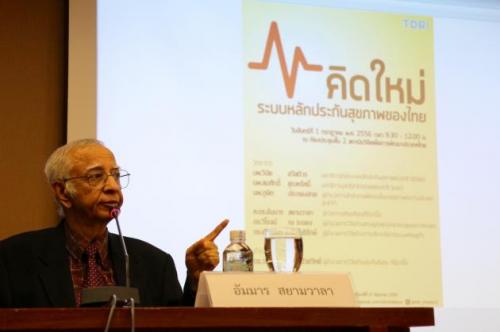 Collecting tax from the sale of unhealthy food products such as fast food and soft drinks – as well as from airfares and luxury products – would be a potential source of financing for the healthcare funds, according to International Health Policy Programme Thailand director Dr Phusit Prakongsai. He was speaking at a seminar titled “New Thoughts for Thailand’s Health Security System” at the Thailand Development Research Institute.

He said Thailand in the near future would need a lot more funds for medical services, as it now faces new healthcare burdens such as an elderly population increase and the rising number of patients suffering from road-accident injuries, non-communicable diseases, diabetes, alcohol-related illnesses and HIV/AIDS.

These healthcare burdens require a lot of money to invest in health promotion and prevention programmes for communicable and non-communicable diseases, he said.

“The government should play a pro-active role in handling these health burdens,” he said.

To date, the government has spent only 5 per cent of the total healthcare budget for health promotion and prevention programmes.

Meanwhile, prominent economist Ammar Siamwalla suggested the government should collect tax from medical services provided to foreign patients via private hospitals, in order to use this tax money to support healthcare schemes and medical personnel. He said private hospitals benefited from the government’s medical manpower.

TDRI scholar Duenden Nikomborirak urged the government to harmonise the management of the country’s three national healthcare schemes, to handle rising healthcare costs and to reduce the bag of medical services among these schemes.


Rice back at Bt15,000
The Nation / Phuket Gazette
PHUKET: The Yingluck government has given in to pressure from farmers by maintaining the Bt15,000 per tonne pledging price for the second rice crop in the 2012/13 harvest year. But it has left the price for the next harvest year open for a cut.

After the National Rice Policy Committee meeting yesterday, Deputy Premier and Finance Minister Kittiratt Na-Ranong said the decision was based on the finance available, as well as the well-supported stockpile release plan by new Commerce Minister Niwatthamrong Boonsongpaisal.

But the price for next year would be reset, taking the global market and forex rate moves into consideration. The price would be announced some time ahead of the next harvest year, so farmers can make a decision if they want to grow more rice or switch to other crops that could generate more cash.

“This is in line with the government’s agricultural zoning scheme, to promote other economic crops like sugar cane,” he said, adding that Thailand still needs an additional 30 million tonnes to satisfy demand from the sugar and biofuel industries.

In the latest harvest year, Thai sugar cane output hit a new record high – over 100 million tonnes. Other possible crops are rubber and palm oil. Under the zoning scheme, lists of crops suitable for each area will be announced as a guideline to farmers.

Thai Agriculturist Association chief Wichian Puanglamjiak said farmers should be consulted before the government possibly reduces the minimum price. And the government should also help farmers by reducing prices of fertiliser, seed, insecticide via subsidies or reduction in tariffs, along with government loans with lower interest.

The government has been under huge pressure over the past week from farmers to maintain the Bt15,000 price for 100 per cent paddy rice, at least until the end of the 2012/2013 harvest year. Earlier, the rice committee resolved to revise the second-crop price to Bt12,000 per tonne, to limit losses.

Kittiratt said yesterday there was room to accommodate the change based on Agriculture Ministry data that the second-crop output is only 2.9 million tonnes. Plus, based on a talk between Niwatthamrong, his deputy Yanyong Phuangrach, plus Foreign Trade and Rice Department officials and exporters, stockpile releases should improve in the second half of this year and the proceeds would support the current price without hurting fiscal discipline. Even with the old price, the cost of the pledging scheme, which involves some 22 million tonnes of rice, would be within the Bt345 billion target for the harvest year.

“We’re in the condition that we can still take care of farmers while concurrently upholding fiscal discipline,” he said.

Taking the new job yesterday, Yanyong unveiled a plan to release more than four million tonnes of rice from July-September so the government can cut its spending on rice stocks and get money to send to the Finance Ministry. The release price should be more flexible – in line with the market or about US$500 a tonne of white rice. They would allocate big lots to major consuming countries such as Indonesia and the Philippines, but may not strike government-to-government deals with buyers. They could allow private exporters to handle the stocks, as they were more efficient. Stocks from pledging amount to 17 million tonnes.

Yanyong and Niwatthamrong also vowed to reduce corruption, and boost transparency and flexibility in rice selling to rebuild the ministry and country’s image.

Niwatthumrong said: “Handling the rice project is one of my priority tasks. The ministry will consider a price that can help farmers, as well as ensure that Thai rice exports can compete and sell in the world market. Rice pledging and releasing should be more transparent. I will look for ways to prevent corruption under the project.”

The government is under pressure to release rice and cut associated losses. But doing this now will mean losses. The cost, insurance and freight price of Thai 100-per cent polished rice is now quoted at around $500 per tonne (Bt15,000), above $450 from Vietnam and India. After losing over Bt130 billion in 2011/12, it has vowed to keep the annual loss below Bt100 billion.

But storing rice further may incur problems. Old stocks requiring heavy use of anti-pest chemicals, which has led to negative reports.

Some consumers have complained that old and possibly contaminated rice was sold in supermarkets. Lab tests are underway. And one Thai exporter was named in a US warning that related to 70 countries