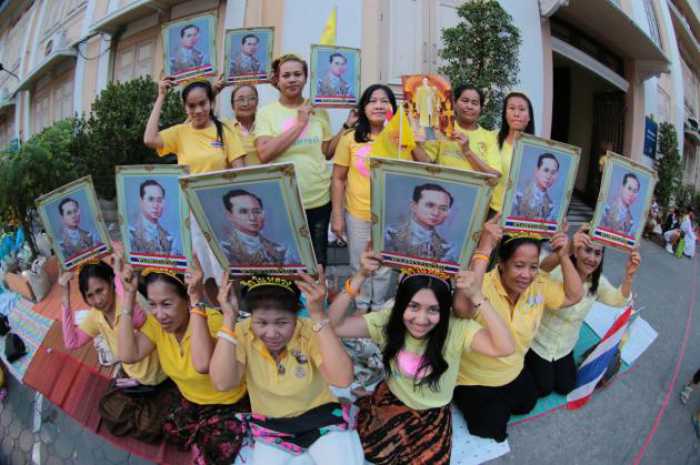 PHUKET: Although Phuket residents will not be able to welcome the Royal Family at Amarin Vinitchai Hall in the Grand Palace in Bangkok, they will no doubt be glued to their television screens as HM King Bhumibol Adulyadej appears for an audience this morning to mark His Majesty’s 87th birthday.

Since yesterday evening, members of the public began gathering along the route from Siriraj Hospital to the Grand Palace, with many saying that they would stay overnight to welcome His Majesty this morning.

HRH Crown Prince Maha Vajiralongkorn, on behalf of HM The King, will preside over a ceremony on Sunday to present the “Thong Chai Chalermphol” victory flag to the military at the Grand Palace, said Bundit Boonyapan, chief of the Royal Thai Armed Forces’ Directorate for Civil Affairs.

Merit-making activities marking HM The King’s birthday starting earlier this week will continue into the evening.

The Phuket Regional Blood Center is holding a special donation event today in honor of HM The King’s birthday and the great work he has done.

Saphan Hin has played host to a slew of concerts, food stalls and ceremonies this week to honor HM The King, an event which will culminate tonight with a candle-lighting ceremony and firework show (story here).