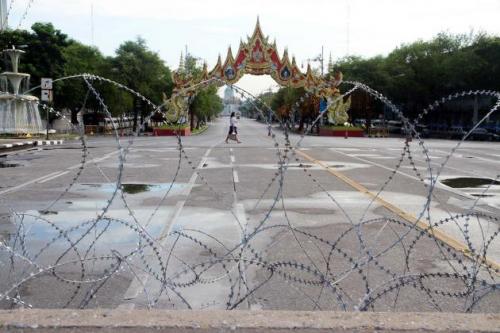 PHUKET: Members of the Phuket Pitak Siam group and their anti-government cohorts in Bangkok will join Democrat supporters and People’s Army protesters to rally against the amnesty bill in front of Parliament House tomorrow.

“The Democrat Party has announced that they will protest overnight and that more people will be coming to join us. Since the Democrats have vowed to protest, I believe Democrat supporters in Bangkok will step out and join the protest.

“Also, the People’s Army, who are rallying at Lumpini Park, will be staying overnight and moving to Parliament House by 9am, before Parliament opens,” she explained.

“The two groups will merge and that will make at least 70,000 people joining the rally,” Ms Apharat said.

Thaikorn Polsuwan, a leader of the People’s Army against Thaksin Regime, refused to elaborate, but said the group has decided to escalate its demonstration today and tomorrow, reported The Nation (story here).

The move to ramp up the protest follows rumors that the Cabinet may resort to issuing an amnesty decree – instead of having the controversial amnesty bill debated in Parliament, Mr Thaikorn said.

The government is legally empowered to issue a decree without having to seek Parliament’s endorsement. Doing so would bypass the need for any support from the public’s elected representatives from across the country.

Mr Thaikorn said an amnesty decree, if promulgated by the government, would be a significant turning point for Thailand’s politics, but he doubted that the government would make such as a decision.

Meanwhile, Ms Apharat today told the Gazette the Phuket contingent of protesters, who left the island on Saturday (story here), will remain in Bangkok as long as necessary to protest the bill.

“I am unable to confirm how long the protest will take. The only thing I know is we will stand against the bill,” she said.

The amnesty bill being protested seeks pardons for red-shirt supporters jailed for offenses during the government protests from September 19, 2006 to May 10, 2011.

However, it excludes leaders of those political protests who also allegedly violated the law, reported The Nation.

The protesters are also rallying against the government invoking the Internal Security Act for the three Bangkok districts where the protests are being staged.

Invoking the ISA grants the police and the military wide-ranging powers in containing any demonstration the ruling authorities brand a threat to national security.

The protesters deem the move to be a violation of their constitutional rights.

Mr Thaikorn said some members of the People’s Army will today file complaints with the Ombudsman, the National Human Rights Commission, the Constitution Court and the Administrative Court against the government for invoking the ISA.