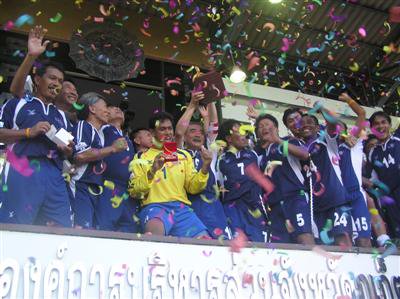 PHUKET: The island is gearing up to host the fifth annual Football Senior World Cup 2010 tournament that kicks off on May 31.

The tournament is to be held in Phuket for the first time since 2006, when the island hosted the inaugural event. Play in this year’s tournament, which runs from May 31 to June 5, will include teams from eight nations:

To ensure fairness, the 11 starting players must meet strict age requirements, with the goalkeeper at least 38 years of age and other members of the lineup as follows:

Group A matches will be played at Surakul Stadium in Wichit, while Group B matches will take place at Karon Stadium.

During group play there will be two games daily at each venue, starting at 4pm and 6pm.

Admission is free to all matches and fans will have a chance to watch football stars of the past in action right here in Phuket.

Seniors World Cup organizing committee chairman Thepitak Chansuthep told the Gazette that the side from Iran will have several players who have represented that country in the FIFA World Cup.

The Thai national team will be staying at the Phuket Orchid Hotel, while the other teams will stay at Centara resort in Karon, he said.

The tournament is organized by the Seniors Football Association of Thailand (SFA) in association with the Phuket Provincial Administration Organization. The Tourism Authority of Thailand is promoting the event, which has corporate sponsors including PTT, Honda, Chevrolet and Isuzu.

In order to maintain the competition into the future, the SFA will try to establish a new organizing body during the tournament: the Federation Internationale de Senior Football Association (FISA).

Thus far Thailand has hosted all four events, all organized by the SFA and played in Thailand:

With headquarters in Thailand, FISA would have three stated objectives: acting as the main source of information for seniors football in all aspects; exploring opportunities for senior footballers to benefit youth; and using sport as way of building friendships and social networks around the world.

During the 2010 World Cup, the SFA will invite senior football associations or clubs from all around the world to become FISA committee members and vote for the chairman and sub-committee heads. Once established, the committee will create polices and operational guidelines and set up a website and office in Thailand.

The organizers say this year’s tournament will be a boon for Phuket tourism at a time when hotel occupancy rates are falling.

TAT must focus on Phuket