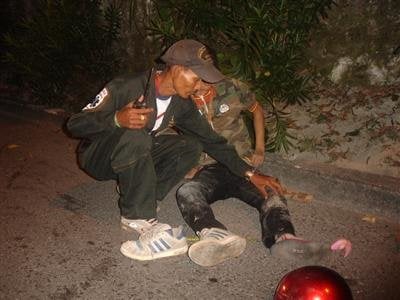 PHUKET CITY: Final figures are in for this year’s ‘Seven Days of Danger’ road safety campaign in Phuket and they are depressing indeed with eight dead – almost triple the number from last year, when three died.

DDPM-Phuket chief Sun Chuntarawong admitted this year’s campaign did not meet its objectives, but said there is little authorities can do to affect change in public views about road safety.

“Change can only come when the people themselves realize the dangers of reckless or drunk driving, speeding…whatever. We will continue to promote road safety for the next campaign [Songkran 2010], but will seek more cooperation from the public and invite them to help lay out the strategy together,” he said.

The final two victims of the holiday period were a pair of teenagers.

They were in a car that crashed into a power pole during rainy conditions at about 6pm last night on Thepkrasattri Rd in tambon Mai Khao’s Baan Makprok, home to the infamous ‘curve of death’ that has claimed the lives of many motorists over the years.

Miss Wassana died at the accident scene and Mr Alongkorn was rushed to Vachira Phuket Hospital, where he later died of his injuries.

The DDPM-Phuket reported that a total of 49,939 cars were inspected at checkpoints during the seven-day period, with 6,503 people arrested or fined.

Motorcycles were involved in 82% of the accidents, which most commonly occurred between the hours of 8pm and midnight.

Drunk driving was given as the cause of 26 accidents with speeding attributed to another 13 accidents.

As in previous years Muang District had the most carnage: four dead, 55 injured.

Nationwide there were 3,534 reported accidents resulting in 347 deaths and 3,827 accidents, all down by about 5% year-on-year.

Nakhon Sri Thammarat had the highest number of reported accidents (128) and injuries (146) of any province.

Chiang Rai, Chiang Mai and Nakhon Ratchasima tied for the most fatalities, with 12 each.

Nationwide 449,673 people were charged with traffic violations throughout the period.