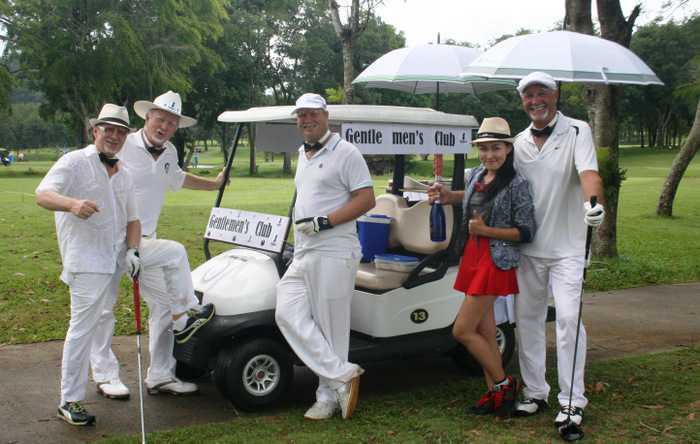 PHUKET: Local golfers in colorful dress on the fairways of Phuket have raised 1.2 million baht for island-based charity the Life Home Project Foundation.

The 4th Annual Life Home Project Charity Golf Event took place at the Blue Canyon Country Club on November 15, when more than 100 golfers took to the fairways and greens of the spectacular Lakes Course.

The tournament was first run by Liam Stewart in 2011 as a way to earn extra funding to help the kids at Life Home Project charity shelter.

“From its humble beginnings, the event is now one of the main income streams for this great local charity,” said Stewart.

The Life Home Project Foundation is a shelter for mothers who are HIV positive and their children – who may or may not be infected – where they can live safely in a supportive community.

“Unfortunately, one of the impacts of AIDS is that parents are unable to look after their children for various reasons such as poverty and family breakdowns. The foundation ensures every child goes to school, so that they receive an education and have access to healthcare,” Stewart explained.

“It is hoped that within the Project that all the kids experience what it is like to live within a loving family environment. The staff, children, mothers and volunteers live and learn together, sharing every day experiences and taking care of each other. The project currently takes care of 25 adults and 22 children, 10 of whom are orphaned.”

The theme for the golf charity event was “Colorfully Uncoordinated”, and the golfers were allowed to dress up and wear anything that was very colorful and did not match.

“This year, the golfers really went out of their way to get into the spirit of the event and we had everything from Rastafarians to superheroes to cross-dressers, as well as lots of color and costumes,” Stewart noted.

“Golf took a back seat for the day and the emphasis was on having fun while raising money for a very worthy cause.”

The golf format on the day was a Two Person Scramble and those who donated a little extra to the charity could have a few mulligans and cheat.

“It was a fantastic sight-seeing golfers playing golf dressed in such unorthodox ways and thanks must go to the owner’s management and staff of Blue Canyon for allowing us to run such a great event,” Stewart told the Phuket Gazette.

The tournament was won by Ken Abday and Rolf Johannsen, closely followed by Kenth Fredin and Wayne Klapko.

The prize for the team who were the most outlandish and put in the most effort in keeping with the dresscode went to the perennial winners, the father-and-son team of Chris and Tom Gordon.

The prize presentation and traditional gala dinner was hosted in the well-appointed Club House Restaurant at Blue Canyon and was opened by Helene Fallon Wood, the Irish honorary consul for Phuket.

The children from the shelter and the caddies wowed the guests with a performance of authentic Thai dancing. The caddies looked stunning in full Thai costumes. Martin Carpenter, British honorary consul for Phuket, conducted the live auction, which was entertainment in itself and with his dulcet tones and powers of persuasion levered lots of donations from the guests.

“At the end of a great day of golf and fun, the total raised is over 1.2 million baht, which is unbelievable, considering our first event only four years ago raised 120,000 baht,” Stewart appreciated.

“Thanks must go to all the local businesses and individuals who sponsored so much and the management and staff at Blue Canyon for all their help in staging the event. It is a credit to the members of Blue canyon who have made this event a spectacular success.”

Every baht raised on the day is paid directly into the Life Home Project bank account,

“Nothing for the golf event is paid for. Everything from printing, design, prizes, costumes and so on is all donated or sponsored,” Stewart said.

“A big thanks to everyone who helped this year and hopefully see you all at next year’s event.”