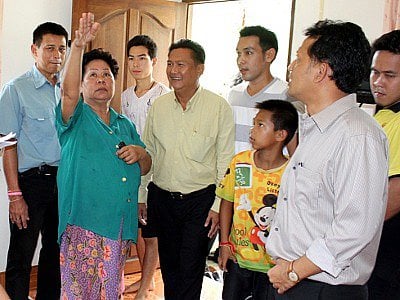 PHUKET: A team of mental health professionals on Wednesday visited villagers at Srisoonthorn Moo 2 to provide counselling after the 4.3-Richter earthquake struck fear into their hearts on Monday.

Data from the Thai Meteorological Department has identified Thalang as the epicenter of Monday’s earthquake, with the villagers being rattled several times a day since by recurring aftershocks.

Dr Pongkasem said the villagers were more scared of the local earthquake than they were of the major quakes that struck off northern Sumatra on April 11.

“The villagers were not directly affected by [the tsunami in] 2004, but they have never before experienced an earthquake like they did on Monday,” said Dr Pongkasem.

“They feel unsafe and worry about the situation. Many of the villagers were so stressed that I prescribed them anti-stress pills,” he said.

However, Vachira Hospital psychiatrist Dr Padtaree said that many of the villagers refused to take the pills because they were afraid they would fall asleep and would not be able to escape if a calamity occurred.

“Most people in Srisoonthorn Moo 2 fear that the earthquake [on Monday] and the many aftershocks since may be a sign of a big disaster about to happen. They are scared because they did not know what to do if another earthquake strikes,” said Dr Padtaree.

“I hope they feel better after our visit,” she added.

Dr Pongkasem advised all people to give credence to what they read and hear in the news, and not pay attention to rumors.

“I want everyone to follow the news carefully. The only accurate information is that which can be proved scientifically and academically. Please check the source of the news before believing it and do not panic about the situation,” he said.